High above the surf and tanned beaches of Hawaii lies one of the Pacific’s highest mountains: Mauna Kea. Capped at 13,796 feet (4,205 meters), it’s the perfect perch for some of Lockheed Martin’s employees in Hawaii. There they study the sky to inform the science community about space junk, and—much farther away—planets. In fact, they recently helped find new ones outside of our solar system.

“We’re showing that there’s still so much to discover about our galaxy,” said Rick Kendrick, a scientist at Lockheed Martin’s Advanced Technology Center in Palo Alto, California. “We must keep exploring, because while these planets haven’t proven habitable, one day we might find one that is.”

Rick and his colleagues at Lockheed Martin operate the UK Infrared Telescope (UKIRT) atop Mauna Kea along with the University of Arizona and the University of Hawaii under a NASA contract. Together this team of space experts sifts through piles of data to reveal more about our galaxy. Scientists use UKIRT for a variety of investigations, sometimes examining orbiting space debris to keep satellites safe, but other times they look farther way, into the blackness of space, to see what’s out there.

“Using ground-based telescopes complements the space-based instruments to add even more observing power to tough missions,” Rick said. “That places an observatory like UKIRT in high demand. In the past two years, we’ve used it for thousands of observations, helping scientists around the world push discovery to new levels.”

In an exciting recent development, data collect by UKIRT recently aided in the discovery of three Earth-sized planets orbiting a star about 40 light years from Earth.

UKIRT is just one project at Lockheed Martin that looks for exoplanets, or planets outside our solar system. To date, NASA has confirmed more than 3,200 planets outside our sun’s gravity, with thousands more under investigation. With such a wealth of possibilities, scientists need powerful tools to explore.

One of the most important space telescopes of our time, NASA’s Spitzer Space Telescope, has also been used to find exoplanets. It was the first to directly detect light of planets outside our solar system. Its infrared sensors study image wavelengths around stars and can isolate planetary information. Not only can Spitzer detect planets, it can glean precise information about temperature, climate, all informing scientists in deciding if these worlds could sustain life.

“Spitzer’s breadth makes it a remarkable tool for exoplanetary discovery and exploration,” said Mark Effertz , Lockheed Martin’s project manager for Spitzer. “Weather maps of distant gas giants, remote volcanic rocky planets and solar systems near the core of the Milky Way galaxy are just some of the secrets revealed by Spitzer. The diversity of newly discovered worlds is staggering. With every new observation, scientists continue to refine their understanding of planetary system evolution which in turn helps us piece together the history of our own solar system. By looking so far away, we are actually learning about us.”

Through continuous innovation, scientists and engineers have tripled Spitzer’s mission lifetime while refining all of its capabilities. The knowledge gained from Spitzer’s experiences is shaping the next generation of science and exploration.

NASA’s exoplanet-hunting missions have generated a lot of buzz, and future missions are under development to take discovery to the next step.

A letter published in the journal Nature covered the recent exoplanets findings aided by UKIRT. It also gives some insight into the future of deep space analysis with another project Lockheed Martin supports, the James Webb Space Telescope. The Advanced Technology Center built its primary optical instrument, the Near Infrared Camera (NIRCam), to study the faintest stars. Some nearly as old as the universe itself.

“The next generation of observatories will then allow far more in-depth exploration of the atmospheric properties,” the Nature article said. “In particular, data from the James Webb Space Telescope should yield strong constraints on atmospheric temperatures and on the abundances of molecules with large absorption bands including several potential bio- markers such as water, carbon dioxide, methane and ozone. “

The most ancient light in the universe—about 13.4 billion years old—can reveal how solar systems were created, and NIRCam will capture the faintest glimpses of our distant past. NIRCam is currently testing with the rest of the optical systems of the fully assembled spacecraft at NASA’s Goddard Space Flight Center, readying for launch in 2018.

“We can learn a lot from both optical and infrared telescopes, but now that we’re looking deeper into our past, infrared instruments will reveal what the eye cannot detect,” said Alison Nordt, Lockheed Martin program manager for NIRCam. “In some cases the light is so old that the spectrum is shifted into the infrared, and that requires very sensitive instruments to detect. NIRCam is the most precise IR instrument we’ve ever made, and we hope to use some of that technology for future missions that show a bigger view of space.”

Another space telescope just beginning development is the star hunter that will complement the Webb Telescope’s precision stare. The Wide-Field Infrared Survey Telescope (WFIRST) will take in a panoramic view of the sky, looking for new stars and solar systems that could yield even more planetary discoveries. Advanced Technology Center scientists are working on a concept study for a major part of the Wide Field Imager, which is the primary infrared instrument for the mission scheduled to launch in 2020.

Back on its mountain above the clouds, UKIRT continues to look up at new targets for future missions like WFIRST. And while many look to Hawaii’s scenic coastline for inspiration, Lockheed Martin employees continue to look up.

“For every world we discover, there’s many more right behind it,” Rick said. 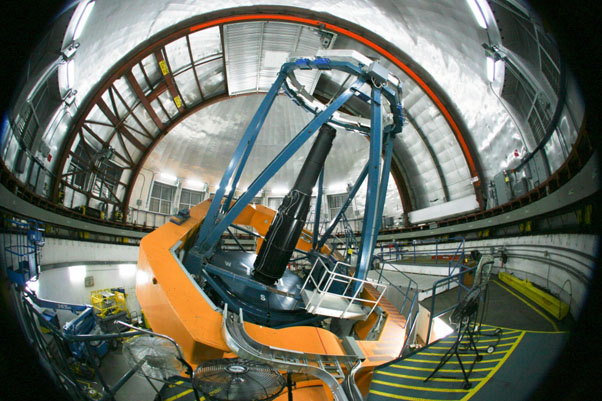 Lockheed Martin teamed up with NASA and the universities of Arizona and Hawai’i to use one of the World’s largest infrared telescopes to study near-earth space debris and asteroids. The United Kingdom Infrared Telescope (UKIRT), pictured here, is the largest IR telescope in the Northern Hemisphere and is located atop Maunakea, Hawaii. 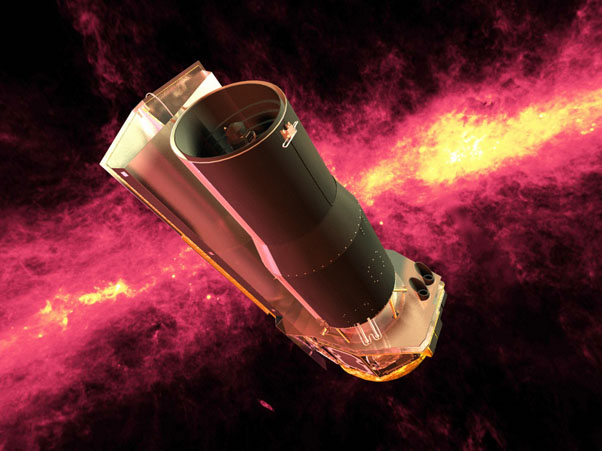 Spitzer seen against the infrared sky. The band of light is the glowing dust emission from the Milky Way galaxy seen at 100 microns.