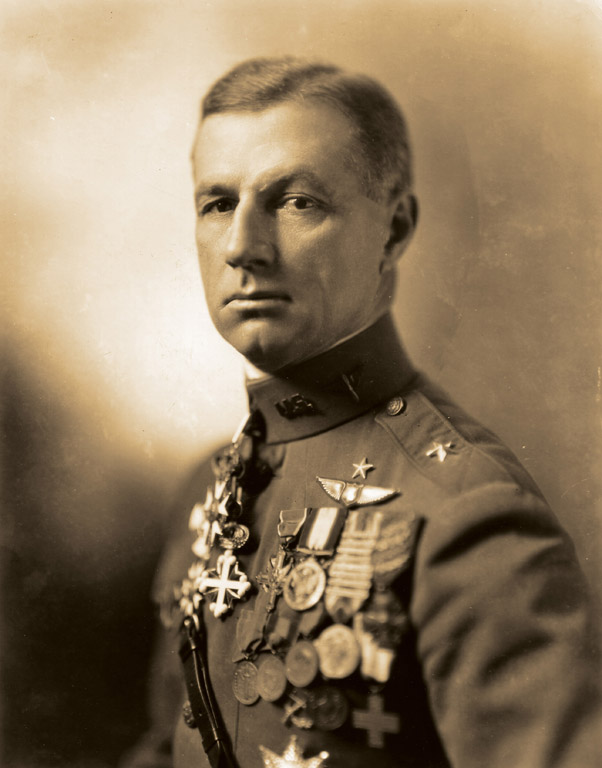 FORT SAM HOUSTON, Texas — Fort Sam Houston, one of the oldest military installations in the United States, has been the home to many famous figures over the years. Construction began in 1876 and since its establishment; Fort Sam has played an integral part in American military history.

Fort Sam has seen the likes of many famous generals, including John J. Pershing, Dwight D. Eisenhower, Joe Stilwell, Benjamin Foulois and many more, but of all the prominent military generals housed on the post, none were more turbulent and controversial than Gen. William “Billy” Mitchell.

Although Foulois was given the honor, “Father of Military Flight,” Mitchell, a stanch advocate and visionary of air power, became regarded as the “Father of the United States Air Force,” because he was instrumental in bringing to the forefront the need for air superiority.

Mitchell also believed that bombers should take the place of battleships and there should be a separate command for the Air Service.

Mitchell once said, “Nothing can stop the attack of aircraft except other aircraft.”

Born Dec. 29, 1879 in Nice, France, Mitchell was the eldest of John and Harriet Mitchell’s ten children.

John Mitchell was a representative and a senator from Wisconsin.

Billy Mitchell grew up in Wisconsin and enlisted in the Army in 1898 during the Spanish-American War. He served in Cuba, the Philippines, Alaska and in Europe.

In 1913, Mitchell was promoted to captain and became the youngest officer to serve on the general staff.

In 1916, he transferred to Virginia to become interim commander of Army Aviation, which at that time was a division of the Army Signal Corps.

After the new commander arrived, Mitchell was promoted to the rank of major, and assumed the position of deputy commander of Army Aviation.

Army Aviation is where Mitchell got his first taste of flying, and where his passion for aviation began to grow, so much so that he decided to become an Army pilot. But at age 38, he was told that he was too old to fly.

Despite the Army’s rules, Mitchell was so determined to fly that he enrolled in a civilian flying school and paid for flying lessons.

In 1917, Mitchell was already in France studying the production of military aircraft, when the U.S. declared war on Germany. He was promoted to the war-time rank of Brig. Gen. and given command of all of the American aerial combat units in France.

Putting his knowledge into practice at the Battle of St. Mihiel, Mitchell commanded 1,481 American and Allied airplanes. There he demonstrated what air power could do by massing an assault that sent wave after wave of planes to attack the Germans across battle lines destroying their ground power.

After World War I, Mitchell returned to the U.S. and despite his achievements was reverted back to his permanent rank of colonel, due to Air Service drawdown in manpower.

He also learned he was not to be appointed to head the Army Air Service. Instead, Mitchell was selected as deputy chief under Maj. Gen. Charles Menoher. During the war, Menoher had commanded the VI Corps and also participated in the offensives at St. Mihiel.

Despite his disappointment, Mitchell still became an advocate of an independent Air Force, and promoted the small Army Air Service with border patrols, forest fire patrols, aerial mapping missions and any other activity that demonstrated the value of aviation, hoping to bring about change.

Mitchell became increasingly vocal in his opinion about the need to strengthen air power.

He publicly attacked superiors in the Army, Navy and even the White House, making a statement to the New York Times, Dec. 6, 1919 that read: “The United States had produced practically no aerial war equipment since the armistice and consequently, is not capable of meeting any first class power in the air today, as foreign countries had continued development of wartime equipment.”

He testified before the House subcommittee, where he told Congress that the Air Service could sink any battleship in existence. He called for a demonstration in which airplanes would bomb ships.

Mitchell asked for a test to confirm that airplanes could bomb ships.

Congress and the Navy reluctantly gave in and on July 20 and 21, 1921, Mitchell and the 1st Provisional Air Brigade demonstrated to the world the superiority of air power.

He and his unit sank the famous, “unsinkable,” Ostfriesland, a captured German battleship.

However, the Navy was not pleased with the outcome of the tests; countering that Mitchell cheated by exceeding the parameter of the tests.

Nonetheless, the Navy began developing aircraft carriers, while Congress continued to cut the Air Service’s budget.
Mitchell was transferred to Fort Sam Houston, where he was assigned as the aviation officer of the Eighth Corps in 1925.

He lived on Fort Sam and resided in Quarters 14 (now designated as the Billy Mitchell House) on Staff Post Road.

His office was in the Quadrangle.

Mitchell’s frustration climaxed after the Navy’s airship Shenandoah crashed due to weather in September 1925.

Mitchell publicly accused the Navy and War Departments of “incompetence and criminal negligence.”

In a statement to the press, he said, “Brave airmen are being sent to their deaths by armchair admirals who don’t care about air safety.”

That published statement was the beginning of the end of Mitchell’s military career.

In November 1925, Mitchell was called to Washington D.C. and court-martialed on the charge of “Conduct to the prejudice of good order and military discipline and in a way to bring discredit upon the military service.”

Mitchell was convicted of insubordination, but rather than serve a five-year suspension, Mitchell decided to resign his commission.

During retirement in Virginia, he continued to be outspoken on the importance of air power. He wrote books, newspaper and magazine articles, and gave lecture tours until his death, Feb. 11, 1936.

A military aircraft bomber, the B-25 Mitchell, was named after him. In 1979, Mitchell was inducted in the International Hall of Fame.

Mitchell predicted that a war between Japan and the U.S. was inevitable. That prophecy came to fruition Dec. 7, 1942. Mitchell’s presence on post and the Centennial of Military Flight will be celebrated March 2 beginning at 8 a.m. with exhibits, a fly over by a Wright “B” aircraft and events throughout the day.