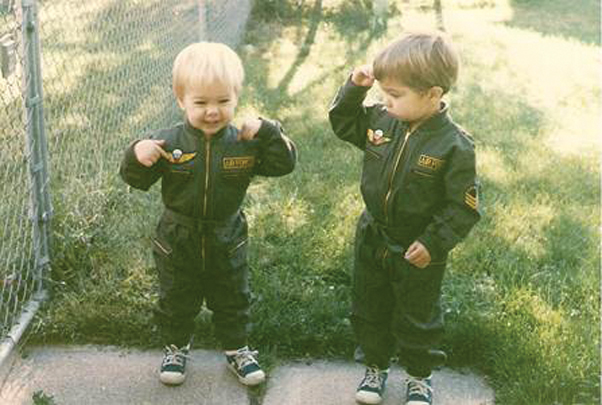 (U.S. Air Force Photo by Airman Jackson N. Haddon)ALTUS AIR FORCE BASE, Okla. — The year was 2013; the President of the United States was flying to Israel for Passover and three C-17 Globemaster III’s and one C-5 Galaxy would be accompanying him. Two of the pilots had more than the mission in common; they were brothers.

Capt. Kyle Kellet, C-17 Globemaster III pilot, and Capt. Justin Kellet, C-5 Galaxy pilot, attended college together, went through Reserve Officers’ Training Corps together and then both became pilots. Less than one percent of the population serves in the armed forces, and serving with your sibling is even more uncommon.

Since a young age, the brothers thrived on competition and that has only continued into their careers.

“With everything we do, we always try to one up one another,” Kyle said. “Joining the military has not changed that.”

With only 13 months between them, where one went the other soon followed.

“We were attached at the hip growing up,” Justin said. “We played sports together, both attended the University of Nebraska where we lived with one another, and later, went through ROTC together to eventually became pilots.”

Growing up with Air Force roots, the brothers completed ROTC, both qualifying to be pilots. They went on to different aircrafts and different bases but kept in contact the best they could.

“The first few years at our first assignments on opposite sides of the country, I saw Justin more than I saw anyone else in my family,” Kyle said. “Because of the nature of this job, it was kind of crazy seeing him more often than the rest of my family.”

In recent years however, things have changed. The duo started to have some troubles meeting up. Between family, mission requirements, and being on separate coasts  made finding time together vastly more difficult. However, the Air Force was not done bringing the brothers together again.

“I flew C-5’s for the last four years out of Dover and had the opportunity to apply for a Career Broadening Cross Flow Program,” Justin said. “I was lucky enough to get picked up and now I get to learn how the other half of Air Mobility Command works and go fly tankers. I just had my second flight a few days ago and Kyle was my first refuel.”

Though the brothers are headed in different directions, they’ll always have time for a little competition with each other.

“There will always be something, I think. It’s been a trend with us since we were kids,” Kyle said. “Even basic tasks become, ‘Well, I bet I can do that faster than you.’  It’s just a brotherly competition no matter what we do.”

The brothers may go their separate ways throughout their careers, but the competitions they have and the opportunities given by the Air Force will always keep them together.