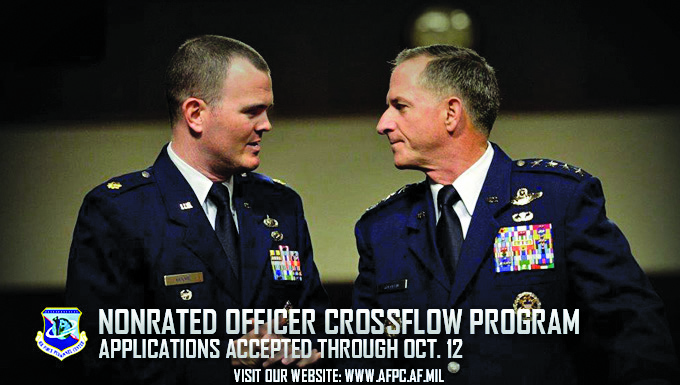 One of today’s opportunities for officers to broaden career options comes from the nonrated line officer crossflow program, which currently has openings for officers on active duty in certain career fields to volunteer for retraining into undermanned career fields. The program is designed to optimize the officer inventory and reduce risk in several key mission areas where low manning levels are more severe.

Maj. Christopher Moore is a former communications and information officer who volunteered to retrain in 2005 and chose public affairs. Moore has the ear of the Chief of Staff of the Air Force, or at least he did until just recently, serving a year as public affairs advisor to former CSAF Gen. Mark Welsh, and to Gen. Dave Goldfein while still the Air Forces vice chief of staff. Now Moore is the Air Force Command Information deputy division chief, proving that fear of being non-competitive in a new career field is unfounded.

“When you leave your core community for another, it is intimidating,” said Moore, who crossflowed from the community that would eventually become cyberspace operations. “However, that feeling doesn’t last long. In public affairs’ tight-knit family, you’re surrounded by talented Airmen and given an opportunity to grow into your new role as an Air Force communicator.”

Crossflow is a permanent move into the new career field. Officers will maintain their original Air Force Specialty Code as a secondary AFSC, but the AFSC they crossflow into will become their primary and future assignments will be determined based on the new AFSC.

Moore had the opportunity to lead public affairs efforts at a busy mobility wing, was selected for an Education with Industry assignment and intermediate developmental education in-residence and commanded a combat camera squadron before his assignment with CSAF.

“Having talented, motivated officers join public affairs mid-career is not new to us,” said Air Force Public Affairs Director Brig. Gen. Ed Thomas. “We have experience setting them up for success, just like Major Moore. Another crossflow officer is serving as a numbered Air Force Public Affairs director and one of our most recent crossflows has been selected to get her master’s degree through the Air Force Institute of Technology.”

“Every day as a public affairs officer is challenging, yet rewarding.” Moore said, “the information environment is always evolving and it’s amazing to find new ways to tell our Air Force story.”

The special duty assignments branch at the Air Force Personnel Center is accepting applications through Oct. 12. A panel of five colonels representing the affected career fields will convene in October to select volunteers for crossflow. Unlike past multi-phase programs, this year’s program is voluntary only and there will not be an involuntary follow-on phase.

There are several program exemptions. Careful review of the crossflow eligibility and application messages to determine eligibility before beginning the application process is encouraged. Officers will be notified by December to begin reporting for training in their new career field during the summer 2017 assignment cycle.

A backseat view of combat airstrikes

The “not my problem” problem