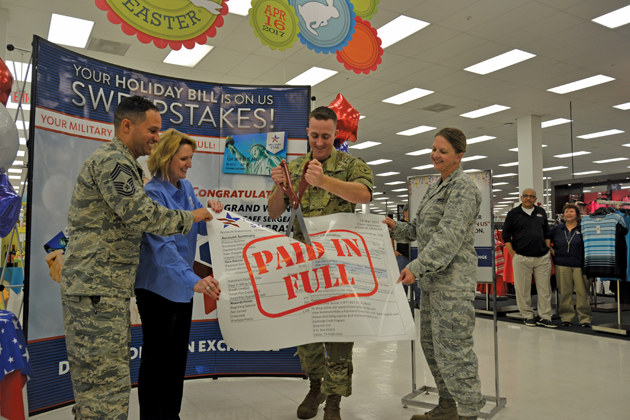 For Staff Sgt. Joshua Graser, Army Recruiting Battalion Phoenix, having one less bill to worry about is giving him extra peace of mind.

As a grand-prize winner in the worldwide Your Holiday Bill Is On Us sweepstakes, Graser had his MILITARY STAR account paid in full March 24. During a presentation at the Davis-Monthan Air Force Base Exchange, Graser took scissors to an oversize MILITARY STAR statement symbolizing his $1,815 bill being paid in full.

“Winning this prize has taken a load off,” Graser said, a Tucson recruiter. “This really means a lot to me.”

“As a recruiter, Sergeant Graser is a role model for all young people who want to join the Army,” said Chief Master Sgt. Luis Reyes, Army & Air Force Exchange Service senior enlisted advisor. “The Exchange thanks him for his service. It’s a privilege to award this grand-prize to a deserving young Soldier.”

The Davis-Monthan Exchange had a lucky streak in the worldwide sweepstakes. Tucson resident Helene Gonzalez, a 95-year-old widow of a Vietnam veteran, received a third-place prize — a $500 MILITARY STAR statement credit, which paid off her account and left her with extra spending money.

At the presentation, Richter acknowledged the teamwork between Davis-Monthan and the Exchange.

“The Exchange is such a great partner to the Davis-Monthan community and the Desert Lightning team,” she said. “We are very thankful for that great partnership and support for our Airmen and Soldiers in the local area.”

The MILITARY STAR card is an exclusive line of credit for the military and their families to use at the Exchange—no matter where military members serve. During November and December, shoppers were automatically entered in the Your Holiday Bill Is On Us sweepstakes each time they used their MILITARY STAR card to pay for purchases at any Army or Air Force Exchange location or on shopmyexchange.com. The Exchange received 4.7 million entries in the worldwide contest.