AL UDEID AIR BASE, Qatar — For some, having a canine companion is like having a tail-wagging best friend. For the Air Force military working dog handlers with the 379th Expeditionary Security Forces Squadron, it means having another wingman they honor like their human counterparts.

“The dogs may be our wingmen, but they are different than a normal wingman,” Medor said.

Medor explained that as a dog handler he is always building a bond between him and his canine partner, just like the relationships he strengthens with his co-workers and fellow airmen, except his canine wingman has heightened senses.

“Emotions travel down leash is a common saying in the military working dog community; my dog knows when I come in to work angry or frustrated and in turn it shows in his training,” Medor said. “We feed off of each other’s energy, so it is important that I keep a steady attitude. I wouldn’t want my dog’s behavior to reflect poorly upon my training.”

Air Force Staff Sgt. Steven Watkins, also a military working dog handler, explained that one of the challenges with this is they are operating 24/7.

Military working dogs are an integral part of the Air Force. The result of a lack of obedience or bad training could be a matter of life and death.

“The dogs are here to find explosives and act as a psychological deterrent,” Watkins said. “I have personally seen the result of good training save a member’s life from an explosive.”

Medor and his comrades wanted to share the opportunity to honor fallen military working dogs and handlers.

The base-wide event was considered a success with more than 65 members participating.

“Rucking is a great way to commemorate those who have given everything to their military service,” said Air Force Tech. Sgt. Jacop Parker, the unit’s kennel master. “It was challenging for both the handler wearing a 60-pound ruck sack and the dog running alongside their handler.”

“All in all, it is always a good day when you have your dog with you,” Watkins said. 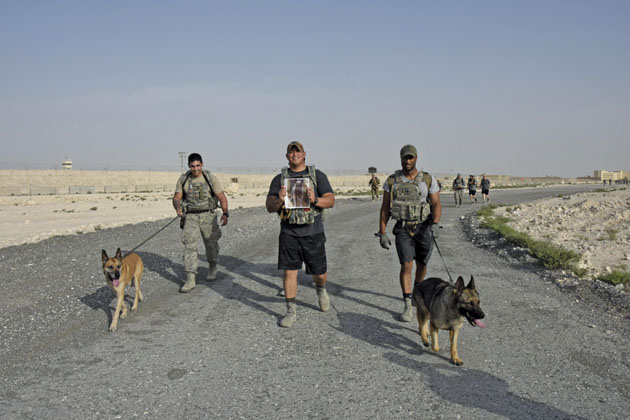