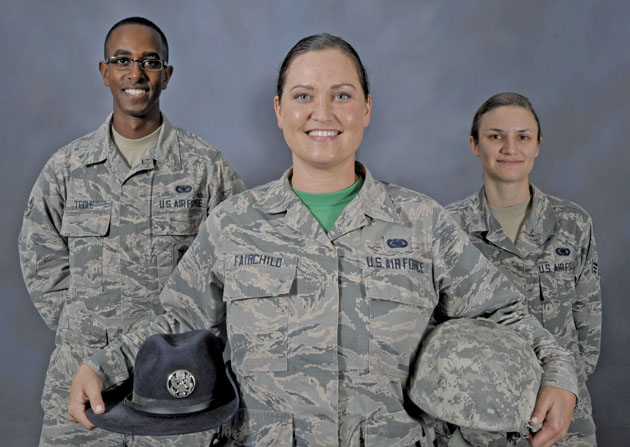 Editors note: This feature is one in a series on focusing on single Airman, highlighting their Air Force story.

MACDILL AIR FORCE BASE, Fla. — In the early hours of darkness, the sound of reveille routinely rings throughout Joint Base San Antonio-Lackland, Texas. Trainees spring out of their beds to begin days filled with training, instruction and loud orders coming from their military training instructors.
The MTIs lead their flights through it all — long hours of in-processing, days filled with classroom instruction, and meticulous practices that build resiliency, and focus.
For Staff Sgt. Jessica Fairchild, a former MTI at JB San Antonio-Lackland, those long hours were worth it.
Six years into her career, Fairchild applied to be an MTI. She had dreams to be a teacher and chose to focus that drive into shaping the next generation of Airmen.
Fairchild said she wanted to make a difference through mentoring and pushing Airmen to do great things.
Despite dealing with the physical and mental demands of being an MTI, Fairchild said she loved it.
“I loved my job every day,” she said. “It is the best job in the entire military to me, but it was also stressful.”
Long hours and strict schedules pack both the trainees and instructors’ days.
“Trying to get 60 people to the same place at the same time was challenging at times; trainees are on a tight schedule,” Fairchild said.
Within two months, trainees must be physically fit and knowledgeable on military concepts in preparation of entering the operational Air Force.
“I wanted every single person to succeed,” Fairchild said. “If some weren’t getting the concepts, I would think, ‘What am I doing wrong?’ I looked to others to get different perspectives. Getting them to where they needed to be was always my goal.”
The impact Fairchild had on her trainees has endured as the trainees became Airmen.
“Our MTIs helped us grow into the Airmen we are today,” said Airman 1st Class Zenawi Tecle, former trainee of Fairchild and now a 6th Security Forces Squadron entry controller. “They taught us discipline, military customs and courtesies, and the importance of respecting rank to build the foundation we all use as Airmen in the operational Air Force.”
After four years, more than 50 flights and thousands of trainees, Fairchild has now returned to her career field as an individual protective equipment supervisor assigned to the 6th Logistics Readiness Squadron at MacDill Air Force Base.
For Fairchild, the four years she spent training Airmen impacted her greatly.

“People reach out to me through email and tell me how they are doing and how I impacted them,” Fairchild said. “Looking back and hearing from those I trained is rewarding.”
Aside from following her passion for instructing, Fairchild’s experience has prepared her for later in her career.
“Being an MTI has prepared me for the next ranks,” Fairchild said. “As an MTI, we handle many people and their individual needs within the flight. We learn to manage both time and people, as well as high pressure situations with a fast learning curve.”
Additionally, she has taken her instructor skills and applied them as a supervisor.
“Her experience as an MTI, has given her a zero tolerance policy as a supervisor,” said Senior Airman Kristin Weiland, 6th LRS individual protective equipment technician. “She maintains professionalism and will tell you when you are doing something wrong, but also helps you fix it and to get better. She, as my supervisor, makes me a better Airman.”
Throughout her time in the military, Fairchild applied professionalism and dedication to train thousands of people and groomed them into Airmen.
Someday she said she hopes to return and train more future Airmen who will then serve.