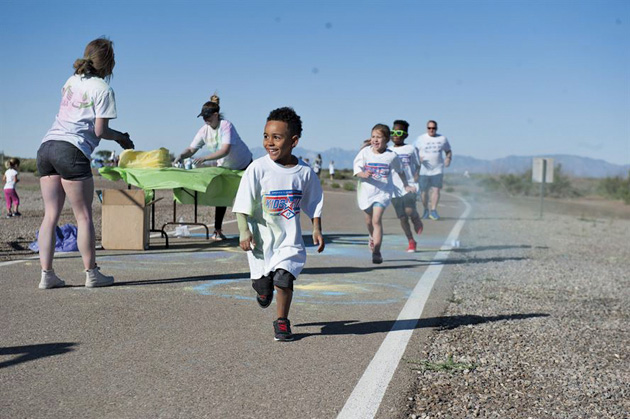 HOLLOMAN AIR FORCE BASE, N.M. ­— The Youth and Teen Center hosted the Art Blast color run 5k and the America’s Armed Forces Kids fun run on May 20 at Holloman Air Force Base.

“The turnout was amazing,” said Harry Miller, the 49th Force Support Squadron Youth sports director. “In addition to the large number of adults that showed up for the 5k run, we had 89 youngsters participate in the Kids Run. That is the most ever I have seen for the America’s Kids Run here at Holloman AFB.”

America’s Kids Run is the largest youth running event in the World. Since 2002, it has been recognized as part of Armed Forces Day at military installations worldwide. This event provides a great opportunity to introduce children and youth to a positive, healthy recreational activity.

As part of the Art Blast color run 5K, volunteers set up tables at the fitness center outdoor track with face paint and shirts to hand out to the race participants. Volunteers also set up tables along the track with various colored paint powder to toss at the runners as they run past, transforming their fresh white shirts into colorful canvases.

“Two moments really stood out to me,” Miller said. “First was the sheer amount of young people that participated. The environment was very upbeat. The second thing was watching the kids run through the color splash zones. Lots of smiles and happy faces.”

The annual Armed Forces Kids fun run started in 1986 with the name Junior Bloomsday, an event for children ages 5 to 13. Younger children would run a half mile, with the seven and eight year olds running one mile, and the older kids running two miles. Over the years 120,000 children have earned their own shirts by completing the annual spring run.

“The event is a great way for families to have a lot of fun and stay active,” said Cheryl Horton, the 49th FSS school-age program coordinator. “This is a good event for people to participate in with their family every year.

AF continues to work with DOD, OPM on cybersecurity incident