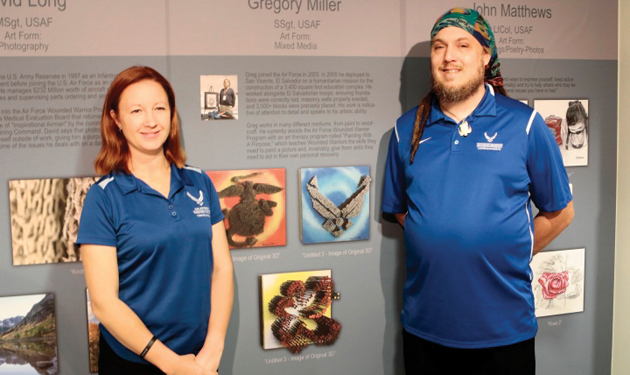 For retired Air Force Staff Sgt. Greg Miller, the hell of his time in Iraq still burns in his mind nearly 10 years later. Thanks to an alternative therapy tapping into his artistic side, he’s on the road to recovery.

In 2008, he was in Kirkuk as part of the Air Force civil engineers’ Prime Base Engineer Emergency Force, better known as Prime BEEF, a rapidly deployable, specialized unit designed to go into bare-bones bases near the front lines and set up working and living conditions for the troops there.

“It was a hot summer, and we got mortared a lot,” Miller said. “A car bomb went off at the gate, and I could hear everyone screaming. When I returned home, that’s when I became really became depressed and wanted to give up on life.”

The experience brought on demons that Miller still deals with to this day. But now, he’s getting better thanks to his involvement in art therapy.

“I went through a lot of inpatient programs, a lot of hospitalizations, a lot of medication,” he said. “But one of the things that helped me to heal was art. I can escape into my own little world where I don’t have a lot of distractions and can be at peace for that moment.”

Miller creates three-dimensional sculpture art with drywall screws, familiar territory for this carpenter. His work is among the 40 pieces now being displayed at the 2017 Pentagon Patriotic Art Program: Wounded Warrior Healing Arts Exhibit. Individuals from the U.S. Army, Marine Corps, Navy, Air Force, and Walter Reed National Military Medical Center’s National Intrepid Center of Excellence in Bethesda, Maryland, created the works, and photographs of the pieces hang in the Pentagon’s Apex 1 & 2 on the second floor through 2017. Miller also teaches other veterans about the benefits of art through the Air Force Wounded Warrior Program’s Art Resiliency Workshop. The Army and Navy wounded warrior programs also have their own art therapy programs, and information on resources is available through individual installations’ military treatment facilities.

Another of those who benefited from art therapy has been Navy Petty Officer 3rd Class Jared Lenahan, who uses photography to heal. About two and a half years ago the Navy corpsman fell more than 50 feet off a mountain while rock climbing recreationally, suffering massive injuries.

“In the hospital, you get into a routine of things — physical therapy, occupational therapy, many doctor appointments — and it becomes a little old,” said Lenahan, who suffered a moderate traumatic brain injury from the fall and has been severely mentally taxed by the multiple surgeries and time he hasn’t been able to walk during his recovery. “Art therapy helps take your mind off the whole process. It’s an escape.”

According to the Defense Department, nearly 150,000 service members have been diagnosed with post-traumatic stress disorder since 2000. More than 360,000 service members have been diagnosed with a traumatic brain injury during the same period. About 85 percent of military patients involved with the National Intrepid Center of Excellence’s Healing Arts Program said art therapy promotes their healing. “The art process has helped a lot,” said Lenahan.

Miller said his recovery is ongoing and still includes lows. He credited his wife Heather for the fact that he’s still here. “If it wasn’t for her, I’d be homeless or dead,” he said.

“I married the most laid-back person I’d ever met in my life, very rarely moved by any stressful situation,” she said of the man who now sports dreadlocks and a bandana. “But when he got back, the simplest things, like an extension cord not reaching an outlet, set him off. I wasn’t educated [on post-traumatic stress disorder].”

Heather knew her husband needed help and sought the medical and psychological treatments important to his healing. She got him traditional care, and she also sees the difference art therapy is making. He sees the difference, too, and encourages others to use this kind of therapy to help them heal.

“I want to incorporate art into healing,” Miller said. “If my art can inspire someone, that’s a plus.”