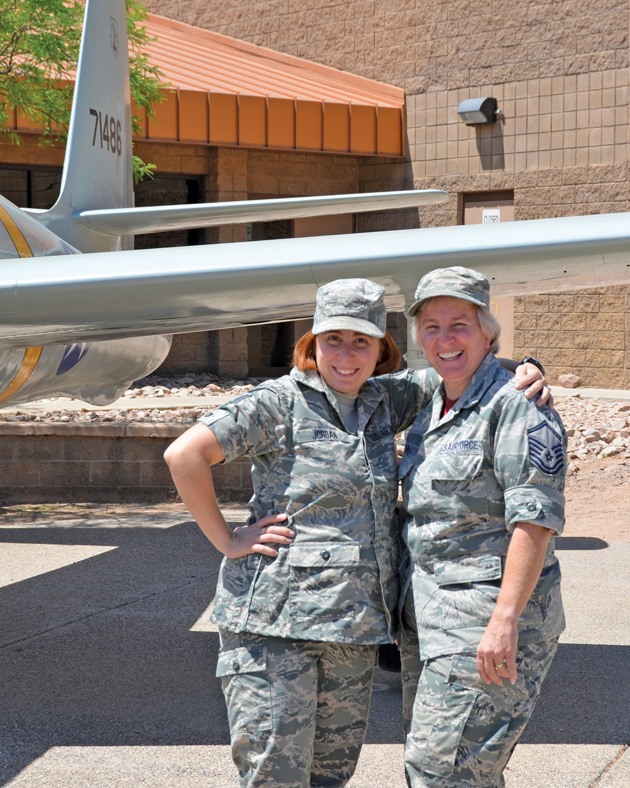 “It is beneficial to work with my mother because she sets the bar for me to exceed,” said Jordan, who works as an aerospace medical technician with the wing’s medical group. She added that her mother sets a good example of airmanship and challenges her to always exceed expectations.

Jordan said she joined the Arizona Air National Guard for education benefits, but gradually her desire for continued service was fueled by a specific Air Force core value: Service before self.

“I can make a difference in this Air Force of ours, and being a ‘1 percenter,’ like many of my brothers and sisters in arms, is something to be proud of,” she said.

“I like the whole generation-effect thing that I share with my mother on this base,” Jordan said. “At times I feel like her protégé, but that just motivates me to continue improving myself in my own way.”

Schmidt, a supply supervisor for the wing’s logistics readiness squadron, said she’s proud to serve in uniform with her daughter.

“It’s a pleasure for me to work with Nichole because it puts a smile on my face knowing that my daughter is right across the street, and she is always there when I need her,” she said.

In addition to her supervisory duties, Schmidt is the squadron’s health monitor.

“I think Sergeant Jordan gets a lot of strong features from having a military mother,” said Air Force Master Sgt. June Nicholas, who works as a full-time health technician at the wing. “Staff Sergeant Jordan is very ambitious, and she gets her leadership skills from her mother.”

Schmidt said she also highly encourages her daughter’s participation on the base color guard team. “Before the team even steps out on the field, I am so proud of Nichole and the team,” she said. “That pride is for everyone on the team because they represent the base so well, but I am particularly proud of my daughter for joining on her own.”

Schmidt, a 31-year veteran, was herself a member of the honor guard drill team when she attended Northern Arizona University. “I am extremely proud of my daughter,” she said. “I know eventually I will be gone, and she will be setting her own pace, and then maybe she will have her own kids do the same thing.”

Jordan said she tells her mother how much she loves her and appreciates her support in what she does. “I love my mother with all my heart,” she said. “She is always there for me, and I would not have it any other way than to serve my country with my mother.”