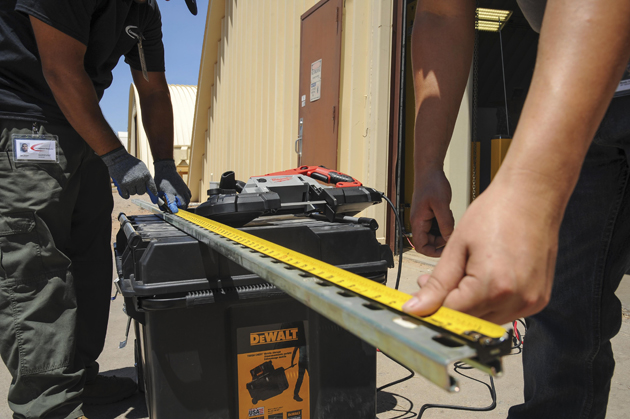 The ceremony was in honor of the 355th CS working alongside Consolidated Networks contractors for a base information transport infrastructure upgrade project that would benefit the entire base.

After years of implementing a plan, the communications specialists recently broke ground at a project site, signifying the physical initiation to the installation-wide upgrade.

The Airmen and contractors have been in the process of creating and executing a modification plan that upgrades Davis-Monthan Air Force Base’s network without interfering with any of the Desert Lightning Team’s connectivity. They are even digging through the tough Arizona dirt for the mass-upgrade.

“The way we make the layout, how buildings connect to each other and how inside the building everything feeds through that main demarcation point, it’s just a way to give more redundancy,” Kopp said. “If my computer goes down, if the building goes down, nobody else is going to be impacted by it.”

The 355th CS works hand-in-hand with technology and has been working on this modernization as early as 2012. They have hopes of integrating more capabilities to the D-M’s network such as bringing in more data and easier connectivity.

“The base can expect a more secure and reliable network,” said Staff Sgt. Nicholas Lindquist, 355th CS NCO in charge of plans and resources. “This project will also pave the way for future modernization projects for base communications.”

After six months of assessments, the modifications are scheduled to be done in mid-2018.