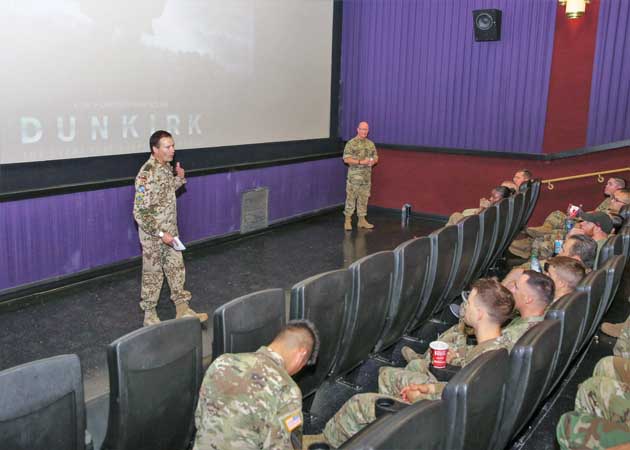 FORT HUACHUCA — Students of the U.S. Army Intelligence Center of Excellence’s Military Intelligence Captains Career Course used the opening weekend of the movie “Dunkirk” to gain a deeper understanding of the events that led up to, and the execution of, the World War II military operation that inspired the film. MICCC students and cadre recruited liaison officers, assigned to Fort Huachuca, for an in-depth brief and arranged a private screening of the newly released movie at a Sierra Visita theater as the venue for the event.

Lt. Col. Elmar Henschen, of the German army, and Maj. Philip Wotton, of the British army, presented an hourlong historical perspective from the viewpoint of the two sides using maps and graphics, identifying the intelligence and leadership successes and failures that occurred in the battle that lead to eventual evacuation.

“The failure of the allied forces to properly identify the ability of the German army to successfully maneuver through the Ardennes Forrest, where the British Expeditionary Forces, French, and Belgian lines were the weakest, lead to the German’s successful penetration and eventually the isolation of the allied forces in the North,” Wotton said. “Remember this, so next time when you are doing your modified combined obstacle overlay, make sure you know the difference between slow-go and no-go terrain, and identify it as such.”

With more than 350,000 Allied soldiers with only minor defensive capability on the beach awaiting transportation to friendly lines, the German forces stopped and waited.

“The Wehrmacht never made a full-scale attack on the beaches of Dunkirk,” Henschen said. “They were waiting on orders from Hitler, with only Luftwaffe continuing the attack.”

The evacuation mission, codenamed “Operation Dynamo,” which is highlighted in the film, involved the requisition of 800 “little ships,” that were commandeered from British civilian fishermen, pleasure yachters and cargo haulers, who would take onboard soldiers who would then be transferred to larger boats off shore. Winston Churchill was hopeful to rescue 65,000 soldiers. In the end, more than 320,000 soldiers were rescued; however, over 68,000 soldiers were killed, wounded and captured. In total, the Allied forces lost 243 ships (including six destroyers), 106 aircraft, 2,472 field guns, 63,879 vehicles and 500,000 tons of supplies in the fighting.

Field Marshall Rundstadt, the German commander-in-chief in France during the 1940 campaign, called Hitler’s failure to order a full-scale attack on the troops on the beaches of Dunkirk his first fatal mistake of the war, and Henschen agrees.

“Many of the British and French soldiers rescued from Dunkirk went on to become part of the Normandy invasion force four years later,” he said.

Although most people regard retreat as a failure, this particular withdrawal had a much different effect on the British people.

“Operation Dynamo had a unifying effect on the British people and created what is called the “Dunkirk Spirit,” a phrase still used today signifying an attitude of being very strong in a difficult situation and refusing to accept defeat,” Wotton said.

The students concluded the historical brief with a private screening of the film “Dunkirk,” which opened in theaters July 20. The movie is proving to be a box office smash, grossing more than $50.5 million in its opening weekend.

Year in Review: May