The U.S. Air Force was heavily deployed during the Vietnam War.

The first bombing raids against North Vietnam occurred in 1964, following the Gulf of Tonkin Incident.

In March 1965, a sustained bombing campaign began, code-named Operation Rolling Thunder. This campaign’s purpose was to destroy the will of the North Vietnamese to fight, destroy industrial bases and air defenses, and to stop the flow of men and supplies down the Ho Chi Minh Trail, while forcing North Vietnam into peace negotiations.

The Air Force dropped more bombs in all combat operations in Vietnam during the period 1965–68 than it did during World War II, and the Rolling Thunder campaign lasted until the U.S. presidential election of 1968. Except for heavily damaging the North Vietnamese economy and infrastructure, Rolling Thunder failed in its political and strategic goals.

The Air Force also played a critical role in defeating the Easter Offensive of 1972.

The rapid redeployment of fighters, bombers and attack aircraft helped the South Vietnamese Army repel the invasion. Operation Linebacker demonstrated to both the North and South Vietnamese that even without significant U.S. Army ground forces, the United States could still influence the war. The air war for the United States ended with Operation Linebacker II, also known as the “Christmas Bombings.” These helped to finalize the Paris peace negotiations.

The insurgent nature of combat operations early in the war, and the necessity of interdicting the North Vietnamese regular army and its supply lines in third-party countries of Southeast Asia led to the development of a significant special operations capability within the Air Force.

Provisional and experimental concepts such as air commandos and aerial gunships, tactical missions such as the partially successful Operation Ivory Coast deep inside enemy territory, and a dedicated Combat Search and Rescue mission resulted in development of operational doctrines, units, and equipment.

When the Vietnam War came to an end, the U.S. Air Force was responsible for flying newly freed POWs from Hanoi, North Vietnam, to the United States. Between Feb. 12 and April 4, 1973, the Air Force flew 54 C-141 flights as part of Operation Homecoming. 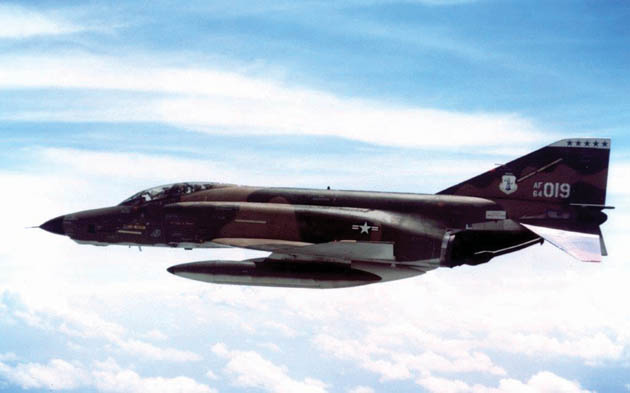 Left side view of an RF-4C Phantom II with auxiliary fuel tanks in flight August 1968. The aircraft was assigned to the 192nd Tactical Reconnaissance Group, Nevada Air National Guard.