MINOT AIR FORCE BASE, N.D. — The colonel leaned back in his seat, pausing for just a moment as he scanned his memory.

“Not really,” he said, recounting if the Air Force had always been a goal. “It was kind of tradition in the family – to serve. It was something the family did. I figured I’d get in, do five years and then get out.”

Smiling, Col. Patrick Matthews shook his head as if trying to imagine the journey from his home in Texas to serving as the Eighth Air Force vice commander, at Barksdale Air Force Base, Louisiana.

With his retirement only a couple months away, Matthews made it a point to visit, speak with and mentor Airmen at Minot AFB, North Dakota – his first assignment after completing training as a B-52 Stratofortress navigator, in 1989. Throughout his career, he said the success he experienced all came down to one thing: attitude.

“’Wherever you go, there you are,’” Matthews said, borrowing the title of a book by Jon Kabat-Zinn. “It’s all about attitude. There’s opportunity wherever you go, because you make it.”

Expanding on that, Matthews explained how a preconceived perception could ultimately define an entire experience.

Matthews said the opportunities afforded him throughout his career would have remained abstract, if not for a constant drive to overcome what he called, “the doldrums.”

“We hold ourselves back so much because of our attitude,” he said. “In reality, we’re really only limited by ourselves. Make the best of where you are – but always evaluate.”

During his career, Matthews said he constantly evaluated if the next move, assignment or position would be best for his family. Then, he weighed those evaluations with, or against, his passion to continue serving and working alongside Airmen.

“The little known secret is we get to hang out with some of the best, most talented people in the world,” he said. “It’s incredibly rewarding.”

With such a positive outlook, Matthews said he tends to look at every day as his “best day.”

“I think every day is the best day,” he said. “Because you wake up – and that’s a good start. Because one day you’re not going to wake up, and you never know when that day is. The realization that it’s a good thing to wake up and go do something is what motivates me.”

Matthews said that idea came to him as an epiphany born out of tragedy, when what began as a routine flyover near Andersen Air Force Base, Guam, turned into death for six Airmen, July 21, 2008. Scheduled to participate in the 64th Guam Liberation Day parade, a B-52 crashed into the ocean 25 miles off the coast of the island. No one on board survived.

“It’s the worst day when you have to bury your friends,” he said, who at the time of the crash was the 96th Bomb Squadron commander. “For me, it’s a day that never finishes. I was back at Barksdale (AFB), and the 20th Expeditionary Bomb Squadron was deployed to Guam, when we found out we had a plane missing.”

The uncertainty, Matthews said, was horrible. However, that initial shock was soon replaced by another feeling – as more information was discovered and communicated.

“It was just a sinking feeling,” he said. “Then, having to tell families that their loved ones are gone, while also trying to keep the unit motivated and organized. I raised them, almost from pups, and to see their lives tragically cut short was, and still is, an incredibly hard thing.”

However, from the ashes of that incident, Matthews said he carried on with a new perspective.

“It made me realize how important life is,” he said. “Since you never know when your last day is, you really have to enjoy every minute and make today your best day.”

Truthfully, Matthews admitted, not every day starts off as that best day. He said that’s when it takes a team to make it past the doldrums and turn those days around.

“Just having someone help you through stuff is important,” he said. “That’s why it’s really important we know our people. How do you know if something is wrong with someone, unless you know them?”

Matthews said that commitment to knowing Airmen is a two-way street.

“It goes up and down the chain; it goes side to side,” he said. “That’s how we take care of each other.”

He smiled again and paused.

“A few months ago I woke up on the wrong side of the bed. I was cranky and everything,” Matthews said. “I had to meet a group of folks at the dining facility on Barksdale (AFB). I go in and I put the façade on, and the guy serving my eggs looked at me and said, ‘what would you like, sir?’”

Matthews, still stuck in the doldrums, said he robotically asked the Airman for scrambled eggs.

“He looked at me and said, ‘I’m going to get you the best omelet you’ve ever had,’” Matthews said. “No kidding, this airman first class saw I was kind of down a little bit and his attitude perked me right up. This kid put me right past the doldrums.”

With such a simple gesture, Matthews said the attitude and smile this Airman projected was contagious.

“He made a difference in my day,” Matthews said. “That matters. Something as simple as smiling and taking a moment to talk with someone could make a difference in their day. It could make the difference. It shows that someone does care. You never know what a little act of kindness will do.”

As a career spanning nearly three decades comes to a close, Matthews said he hopes any legacy he leaves behind will be one rooted in kindness.

“Over 30 years, I hope my little acts of kindness have made an impact,” he said. “I hope they have gone through the Air Force, set the right example and made things better.”

“The Air Force has really changed since I came in,” he said. “Today, there is a different mentality. Through the 90s, we were reforming. Then Iraq happened and we moved from a Cold War to a bunch of little hot ones – which changed our attitude.”

Those changes, Matthews said, diverted the strategic focus away from the Air Force’s nuclear mission and onto other priorities. That shift indirectly led to one of the most serious nuclear incidents in America’s history, when six nuclear warheads on cruise missiles were mistakenly transported on a flight from Minot AFB to Barksdale AFB, September 2007.

“It’s never good when you have to wake the President up and tell him you have a situation like that,” Matthews said. “It had a strategic-level impact across the world.”

Matthews said from this ordeal emerged a renewed focus on the security, procedures and management of America’s nuclear-capable assets.

“The stand-up of Air Force Global Strike Command, which came out of the incident, was actually a good thing,” he said. “We put our eyes back where they should be. It may take a thousand attaboy’s to overcome one moment like that, but our Airmen keep working to make every day better.”

Despite setbacks, incidents and tragedies, Matthews said the lessons learned have been passed along to Airmen, who will carry the torch long after he retires.

“We pass along our identity as Airmen,” he said. “What we are as a service and how we are bound together are more important now than ever. Number one, you are all Airmen – we all wear the same uniform. Number two is your rank, or more importantly, what you do with your rank to make the Air Force better. Number three is your job, your career field, your badge.”

“It should be transparent to anyone out there,” Matthews said. “The uniform, the rank, the badge – it all makes us work better as a team. And above all, the attitude you bring to the table, regardless of the other three things, directly impacts our ability to combat airpower anywhere on the planet.” 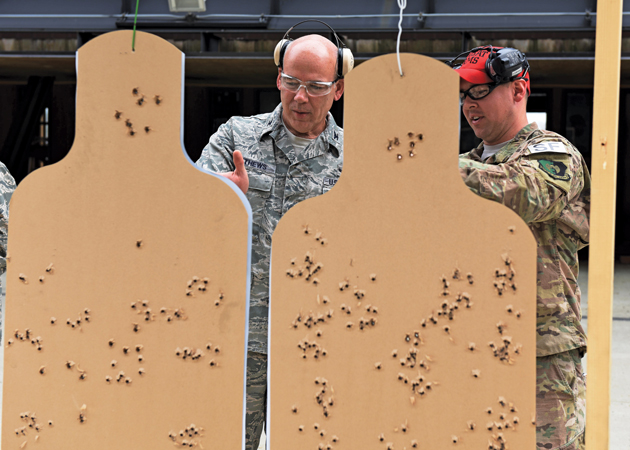 PJs to the rescue

Disbrow delivers State of the AF