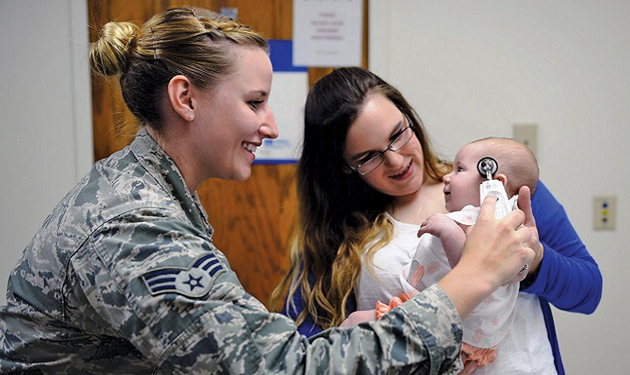 OFFUTT AIR FORCE BASE, Neb. ­— After severe weather left many with property damage, and even more without power, a patient missing an appointment might have been easily overlooked.

For Senior Airman Taylor Scherff, 55th Medical Group Pediatric Clinic medical technician, something didn’t sit right. She knew she couldn’t wait for the normal call-back to happen, so she took it upon herself to reach the family.

“We had a 4-day-old scheduled at our 11 o’clock and they no-showed for that appointment,” Scherff said, a native of Sioux Falls, South Dakota. “(The) mom gave birth in the midst of when tornados hit the area, and all the clinic phone lines were down. I had a weird feeling that I needed to call them myself, so I got the clinic cell phone and got ahold of (the) mom. They were unaware that they had an appointment.”

The Kittel family was in luck. The clinic had a last-minute cancellation for that afternoon and they could fit baby Isabelle in. Additionally, Scherff would be their technician.

“Right away I noticed a dusky color on her when mom started undressing her so I could get her weight and vital signs,” Scherff said. “The more she got upset, the bluer she turned. It was scary. I immediately got a pulse on her and it was ringing in the 60s and 70s and normal is 95.”

Scherff did her due diligence and tried different extremities – arms, legs and feet. She even attempted a different machine. It still wasn’t reaching normal, so she grabbed a provider.

After Scherff’s findings were confirmed, Kittel was moved to a treatment room where she was given oxygen to rule out anything respiratory related. It wasn’t helping, so the Children’s Hospital Newborn Intensive Care Unit was immediately contacted and transport was arranged.

“An NICU nurse and two paramedics came with an ambulance and picked her up,” Scherff said. “Her O2 started going even further down while in transport to the hospital.”

Kittel was taken straight to the catheterization laboratory and underwent an emergency heart surgery. Post procedure, she stayed in the NICU and had secondary heart surgery later in the week.

“If Airman Scherff hadn’t caught the abnormalities in the baby when she first encountered her, that baby very likely would have passed away prior to receiving care,” said Capt. Tracy Nelson, 55th MDG pediatrician. “In talking to that NICU staff at that hospital, it was literally a matter of 20 minutes difference for that baby’s life. They got her to the hospital just in time to save her.”

For her efforts, the Air Force Surgeon General and the Air Combat Command recently named Scherff a Trusted Care Hero.

“I feel overwhelming pride in the work that she does,” Nelson said. “She has always demonstrated a strong work ethic and compassionate care, but this took it to a whole other level of demonstration of skill, and her willingness to call something out even when it broke the norms of how the clinic flow would have worked.”

For Scherff, all the recognition is still hard to grasp.

“It still really hasn’t hit me because I was just doing my job,” she said. “I am proud of myself and the clinic – everyone kept calm and fulfilled their roles.”

But for Casey Kittel, Isabelle’s mom, it was easy to label Scherff her hero.

“I am so happy for her,” Kittel said. “If she hadn’t gone out of her way to see us, Isabelle may not be here today.”

Veteran generations: ‘Where are the last of the Doughboys?’