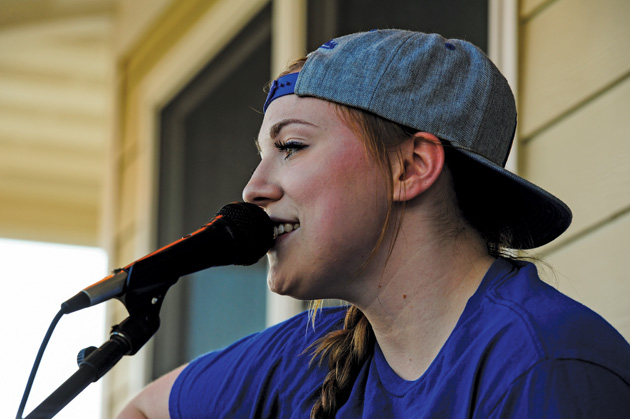 JOINT BASE LANGLEY-EUSTIS, Va. — Sitting on the edge of her stool, staring out at a sea of faces staring back, she tunes her guitar. Once the guitar is just right she takes a sip of her drink, grabs her pick, takes a deep breath and begins playing.

Senior Airman Hannah Walker, 633rd Force Support Squadron food service journeyman, is performing live at the Langley Marina. She occasionally does this to help destress and recenter herself.

“When you’re in the military and you don’t have a hobby or something to do outside of work, it can make you go insane,” said Walker. “I wear this uniform every day and I am an Airman whether I’m in uniform or not in uniform, but there is a time to take the uniform off and put it away and be who you’re called to be, whether that’s to be a husband, a wife or a musician. Those are the things that are going to keep you grounded.”

Walker has been singing for as long as she can remember and music has always been a part of her life. However, Walker didn’t realize how much she needed music until tragedy struck at home.

Only a month after her high school graduation, doctors found a tumor in her father’s brain and needed to perform surgery. To help cope with the storm of emotions she was feeling, Walker started writing and produced 14 songs, jump starting her musical path.

“When I’m stressed, I write it down,” said Walker. “You can get all your anger, all your frustrations out on paper and it stops there. Nine times out of ten, when I’m done writing it all down, I don’t feel stressed anymore.”

Walker continued writing music and later enlisted into the Air Force and is now stationed at JB Langley-Eustis, where she performed live for the first time.

Walker’s first live performance did not go very well, but that didn’t stop her. She continued to perform at open mics every night during the week, slowly improving her confidence and skill.

“Once I got over caring what people thought and when I told myself that the people watching me are here to support me, I got over my stage fright,” said Walker. “It’s crazy because three years ago I would sing in a room with ten people and I would be super nervous, but now I’ve sang in front of hundreds of people and it feels amazing.”

A little more than a year after Walker’s first performance she had to put performing on the back burner due to her daughter being born. Even though she wasn’t able to perform as much anymore, Walker filled that time by writing more music and spending time with her biggest motivation.

Using her dream of being a singer, Walker continues to perform and use her music as an outlet for the stressors in her life.