WEST POINT, Miss. — On Oct. 25, 1967, now retired Lt. Col. Richard Smith and his wingmen had orders to bomb the Paul Doumer Bridge in North Vietnam; the bridge was a mile long and one of the most heavily defended positions in Southeast Asia.

Smith said that leading up to the mission, he and his wingmen had a feeling one of them would not make it back. One of them didn’t.

“To be a fighter or a bomber pilot you have got to believe that if someone is going to get shot down, you just have to look around the room and say, ‘I wonder which one of the son-of-a-guns it’s going to be, because it won’t be me,’” Smith said. “That was the mentality you had to have.”

Prior to that day, Smith conducted a bombing mission in the F-105 Thunderchief. He said pilots would usually fly two out of every three days, but there were so many missions, he flew almost every day.

On Oct. 24, his mission had been changed from a place they had bombed many times prior, to an air base 30 miles from Hanoi that had never been bombed. Smith said there was much excitement between him and his wingmen.

“Boy, the blood pressure and the excitement went up, we were finally going to get to hit a base that had not been hit before,” Smith said. “We had flown right by it coming down Thud Ridge, we could actually see the MiGs taking off and there were a couple of [surface-to-air missile] sights and they would occasionally shoot missiles at us. But now we finally get to take the son-of-a-guns out.”

“It was a beautiful day and there was a lot of excitement,” Smith said. “We launched our 16 ships, four at a time. The force commander’s callsign was ‘Scotch’ so I was ‘Scotch 2.’”

They were about 20 miles away from the base and about three minutes before they approached the air base, a MiG-21 attempted to take him and his wingmen out. The bomber formation had an escort of F-4 Phantom IIs above them for protection, which then went into attack mode.

The bombers rolled in and started bombing the air base. Smith saw a few MiGs on the airfield and told a few wingmen so they could adjust their aim. He said there was a lot of fuel storage on the field and when they were flying away there was a massive explosion.

Smith said when they got back to base there was a good feeling. Stars and Stripes was there to interview them because it was such a big mission. They went and had fun at the local bar but Smith had to fly the next day around midday so he took it easy.

On Oct. 25, 1967, Smith went to his squadron and received news that the base he bombed had been bombed four more times. He said the base had been obliterated by his wing, another Air Force wing and two Navy wings.

Smith, who was also the supervisor of flying, was in the air traffic control tower when he got a call that his target was changed from the air base they had previously bombed, to the Paul Doumer Bridge. He told his No. 3 man to go make the flight plans until he could be relieved from his position.

“Your jaws tighten up, you get a little pale in your face and your heart races a little bit because that is downtown [Hanoi],” Smith said. “That’s the longest bridge in Southeast Asia [and] one of the most heavily defended positions in the history of aerial warfare.”

While Smith was waiting for someone to relieve him, he heard over the radio “Shark 3” had been shot down. The pilot was a former classmate of his while he was in F-105 training at Nellis Air Force Base, Nevada.

Smith said there was a sense of uneasiness among him and his wingmen about their upcoming mission, but they all tried to stay assured they would be fine.

As Smith and his wingmen were en route to the bridge, a plane in front of them had hydraulic problems and had to return to base with an escort which put the formation short two planes.

“We could see Hanoi 30 miles out from 13,000 feet in the air,” Smith said. “It was a clear day. We were receiving intel that there were no MiGs near us, but we could see the SAMs shooting at the Weasels that flew out in front of us.”

At about two to three minutes out, flak started to burst around them. With one minute left until they reached their target, the force commander called “burner out,” and the formation rolled in to drop their payload.

He said the flak was so heavy it was worse than the movies that depict the B-17 Flying Fortresses getting shot at over Germany.

Prior to the mission start, Smith had told his men to release their bombs when they hit 9,000 feet, whether their targeting system was exactly on the target or not.

When Smith hit 9,000 feet he dropped his bombs. When he went to pull the nose of his plane up and light the burner to gain back his speed, he was hit with an enemy flak round.

“I felt it get hit, it sounded like someone hitting a wash tub,” Smith said. “I looked in the cockpit to see if I had any red lights on the caution panel and I looked to see if I was still in formation and I was. Next thing I know the airplane tumbled.”

Smith experienced positive and negative G-forces that caused him to slip in and out of consciousness. He had a hard time reaching the ejection handle because the airplane was a “tumbling bucket of bolts in the sky.” To his recollection, he remembered telling himself he “was not going to die in this son-of-a-gun.” He then used his G-suit to help pull the ejection handle.

After he ejected, he reached to deploy his parachute, assuming he was at about 4,000 feet above ground. The parachute deployed and Smith checked it, then started taking inventory.

He said the first thing he noticed was that he could see the shin bone on his leg but it did not appear to be broken. He then checked his radio and tried to tell the formation he wasn’t going to make it back but he couldn’t override the emergency beacon. He broke the antenna off the radio and threw it, did the same with another radio and then tossed his .38-caliber revolver because he could see a large number of North Vietnamese soldiers coming to intercept him on the ground. Smith said he could hear bullets whizzing by him as he floated down.

When he hit the ground, an enemy soldier with an AK-47 shot a burst at Smith, hitting him numerous times. They then stripped him of his G-suit and flight suit with a machete, got him down to his shorts and a T-shirt and tied his hands with rope and wire.

“There were people all over me,” Smith said. “The militia, if we can call them that, was the only thing stopping them from killing me.”

Smith was handed to a small Vietnamese girl and he said he followed her for an unknown length of time. He was then loaded in a truck and dropped at a hut, then loaded back up and taken into the depths of Hanoi. Two men guarded him in the back of the second truck.

“One looked older, like a master sergeant, and the other was a young recruit,” Smith said. “The younger one had a pistol and he was playing with [it]. The gun went off and missed my foot by three inches and missed the old sergeant’s by less than that. The older man took the gun and chewed him out.”

Smith said it was just getting dark when he pulled up to a prison camp, nicknamed the Hanoi Hilton. That is where the “fun and games” started, he said sarcastically. He was tortured and stayed in the interrogation room for almost a week.

“The interesting part of that as I go through it, is that I broke,” Smith said. “I gave them more than my rank, name, serial number and date of birth, but it turns out everyone did the same thing. They never got anything out of me that was worth any kind of military value.”

He was later put into the Heart Break section of the prison. They opened the door and threw him in his cell that was 6 feet long by 4 feet wide with a concrete bunk. The next morning they brought him some banana peel soup and he said he gobbled it up. Smith said after his initial week of torturing, he started to live like a prisoner of war, which is a lot harder than you’d think.

He moved to another part of the Hilton in the beginning of December and was put with three other prisoners. The cell was 8 feet long and 6 feet wide with two bunks and a small pot to use the bathroom. They had to be careful not to fill it quick because it could only be dumped once every 24 hours.

“One of the hardest things to do was to acknowledge the fact that you were a POW,” Smith said. That you were not going to wake up in your bed at Tahkli [Royal Thai AFB, Thailand].”

Smith explained that if anyone wanted to imagine what it was like, lock yourself in a closest for two hours with no phone or entertainment and then times it by five and a half years. He said he had to do math problems and try to remember his home life in order to stay sane.

In every cell there was a speaker. One day, Smith said he heard his name come on “Hanoi Hannah,” the nickname for the radio. His name was out and his family knew he was alive.

On March 14, 1973, after five and a half years in captivity, Smith was released from his captors and returned to Clark Air Base, Philippines. He was assigned a sponsor who took care of him and filled him in on how the world had changed. He was then reunited with his wife and children at what is now March Air Reserve Base, California.

“I came back to a wonderful family, to a wife who had done a beautiful job of raising my kids,” Smith said. “They all did good and she just did a wonderful job.”

Looking back 50 years, Smith said he doesn’t have any resentment for his captors. He actually felt sorry for them because they had to suffer communistic rule. 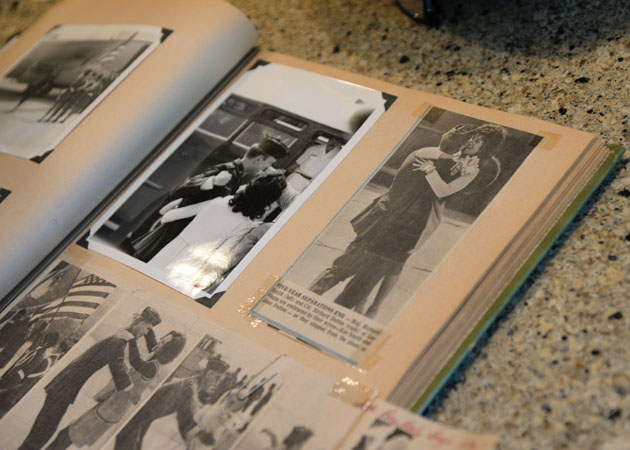 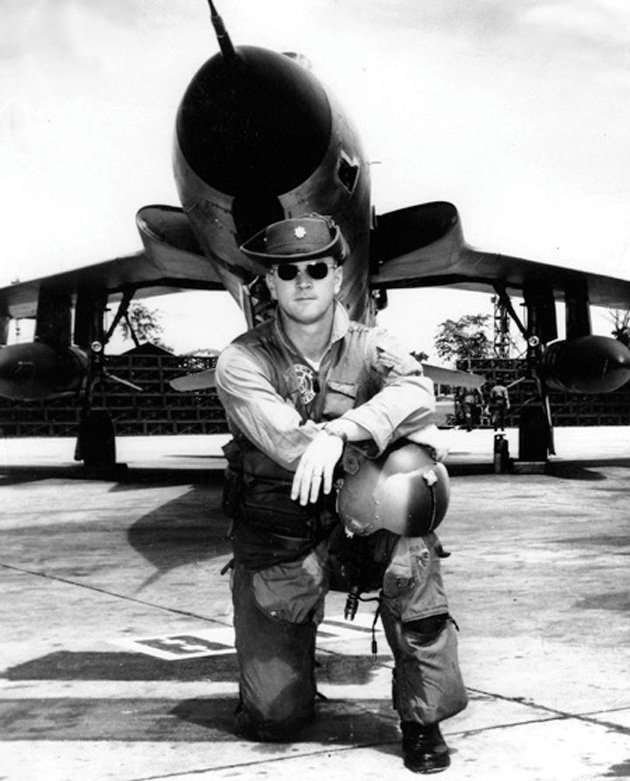 Then Maj. Richard Smith, 333rd Tactical Fighter Squadron pilot, takes a photograph in front of an F-105 Thunderchief on Tahkli Royal Thai Air Force Base, Thailand. Smith spent five and a half years in captivity and was released March 14, 1973. 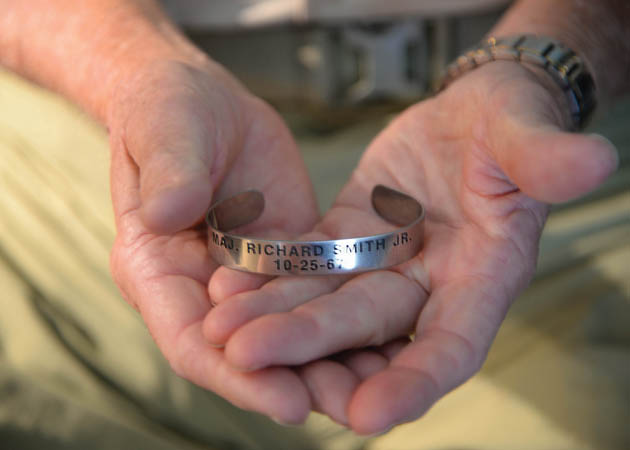 Retired Lt. Col. Richard Smith, former 50th Flying Training Squadron commander, holds a prisoner of war bracelet Oct. 17, 2017, in his home in West Point, Miss. The bracelet was one of hundreds he had returned to him after he was repatriated. The date Smith was shot down, Oct. 25, 1967, is inscribed on the bracelet, along with his rank and name. The bracelets help keep the memory of POWs and those missing in action.