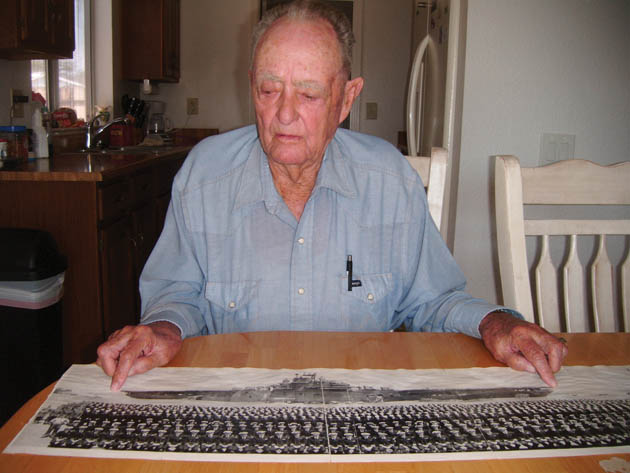 We hear the term ‘larger-than-life’ often, which can mean someone who led a life of adventure and was never afraid to try something new.

Flay Randolph is such a person. He served in the Navy in World War II and joined at age 16.

“My dad was reluctant to sign the enlistment papers because I was underage, but he eventually did,” Randolph said. “I told him that if he didn’t sign, I’d find someone to sign the papers.”

“My dad served in France during World War I, and his life was saved by a person with the name of Flay Griffin, so as a tribute to him, my dad gave me his name,” he said.

Before joining the Navy, Randolph was already involved in the war effort working in an aircraft factory in Goodyear, Arizona. He said his mother was working in the same factory as a riveter.

Randolph has deep Arizona roots. He is a native of Linden, a town just west of Show Low. His family moved to the Phoenix area when he was 5. He attended Avondale Elementary School and Litchfield High School, which closed in the 1950s.

It was on to the Navy in 1944, being assigned to the USS Shangri La, an aircraft carrier. His principle duties were maintaining the elevators for the aircraft and ammunition.

Randolph’s years on the Shangri La etched in his mind and emotions a number of profound events.

There was the incredible skill and bravery of the pilots that still amazes him to this day.

“I saw pilots who would land on the carrier with aircraft missing the tail or wings, he said. “Many of the pilots miraculously survived with only a sprained wrist or ankle.”

Moreover, he said the most profound event he remembers is the burial at sea of his fellow sailors.

After the war, Randolph would be a part of the early years of the atomic age.

“I participated in Operation Crossroads in May 1946, which involved atomic bomb testing conducted in the Pacific Ocean at Bikini Atoll in the Marshall Islands,” he said. “I witnessed one above ground and one below ground test. The power of these weapons was hard to grasp.”

As if all the events of the previous years weren’t enough, Randolph said the Shangri La ran into a typhoon, but escaped with little damage.

Although he was fortunate not to suffer any major injuries, he said he suffered from hearing loss from the big guns, because at that time there was no ear protection.

Randolph had finished his military commitment and was discharged in Seattle.

“I hopped a bus back to Avondale, but the big challenge was finding a job,” he said. “When I returned, jobs were hard to find.

“But it wasn’t long before I heard a knock at the door. It was a man who said he had a job for me managing his pool hall. I took the job and did well at it.”

His job there would lead to him meeting Rachel Irene Tucker, who would become his wife of 68 years.

Randolph said that Rachel had told him when she was born, her birth certificate said Baby Tucker, so her mom let her name herself.

During the Korean War, Randolph had a job preparing aircraft for combat.

Shortly afterward, his brother-in-law asked him to manage 10,000 acres of farmland between Tolleson and Buckeye.

“I took care of the farm for 15 years growing alfalfa and cotton,” he said. “The farm kept me busy and water was expensive. I developed asthma and on doctor’s orders I moved to Payson, Arizona.”

Randolph took a job with a lumber company running a grader for three years, he said. He had a narrow escape when the driver of a logging truck lost control of his truck and it went off the road and crashed. The driver was hurt badly, but survived. Fortunately, Randolph escaped almost unharmed.

To find something safer, he and Rachel moved to Quartzsite in western Arizona where he sold real estate for Betty Hunter Reality.

“I really enjoyed this job and did well at it,” he said. “I sold a lot of property and met people from a lot of different places, including Canada. It was special because I got to work with my wife.”

Randolph’s wife died three years ago on her birthday. They had three children—two girls and a boy. His daughter Sandra passed away from diabetes.

In looking back at his life, Randolph said he is grateful for the blessings he had. He is thankful that the good Lord let him live a good and long life.

A Change of Mind

D-Day — The eyes of the world are upon you