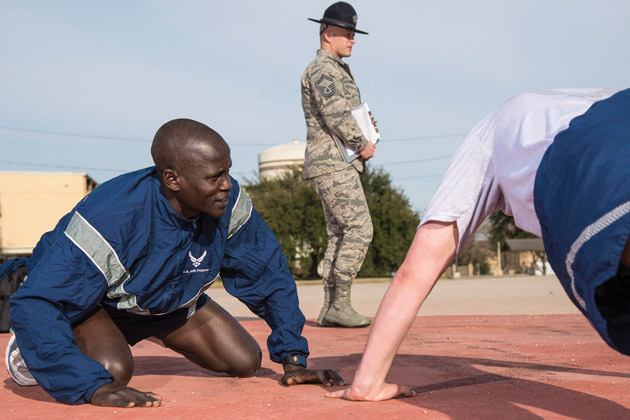 JOINT BASE SAN ANTONIO-LACKLAND, Texas — After enduring countless hardships and overcoming numerous obstacles, Airman 1st Class Guor Maker, a dental assistant in technical training, found his way out of war-torn South Sudan, Africa, and into the U.S. nearly 20 years ago.

As one of roughly 20,000 children uprooted by the gruesome Second Sudanese Civil War, Maker’s childhood was far from normal. After losing 28 family members, including eight of his nine siblings, 8-year-old Maker set out on foot from South Sudan to live with his uncle.

“The country I came from was torn apart by war,” Maker said. “It was all I knew growing up, nothing else. I’ve seen people die in front of me, but I knew no matter what, I had to make it.”

During his harrowing journey, Maker was captured and enslaved twice: once by Sudanese soldiers, and once by herdsmen.

“When I was captured, I was forced to be a slave laborer,” Maker said. “I would wash dishes or do anything else needed to get by. I slept in a small cell and rarely got to eat … but not always.”

Both times, Maker successfully escaped from enslavement and was finally able to join his uncle in Khartoum after three perilous years. However, his journey to safety was far from over.

During a nighttime attack on the perceived safety of his uncle’s home, Maker sustained serious injuries when he was beaten unconscious by a soldier who smashed his jaw with a rifle.

“My mouth was shut for two months and I could only consume liquids because my jaw was broken,” he said. “We fled to Egypt after that, and the United Nations treated my injuries.”

After two years of filling out paperwork at U.S. Citizenship and Immigration Services in Egypt, Maker and his uncle’s family were finally granted permission to enter the United States.

“I was very excited to come to the U.S.,” Maker said. “Looking back at everything my family and I endured, it is a miracle that we made it out of there.”

When Maker first arrived in the U.S. in 2001, he settled in Concord, New Hampshire. Not only did he want to survive, but he wanted to thrive.

“I wanted to change my life, help my parents back in South Sudan, and give my future children a better childhood than the one I had,” he said. “And the only way to do that was through education and determination.”

Maker started with the basics and began learning English by watching children’s cartoons and spending plenty of time with other high school kids just listening to their conversations and absorbing all that he could.

“Within a short amount of time, I was able to communicate with effectively with other students and teachers, order food, and really get by on my own,” he said.

While learning English was a crucial step in his personal journey, Maker’s high school career really took off when one of his teachers introduced him to running.

“Running was always just natural and easy for me,” Maker said. “It was a great high school experience, and it helped me meet a lot of friends, build confidence and it was genuinely fun.”

After winning the National High School indoor two-mile title, Maker received a scholarship to compete at Iowa State University, where he allowed himself to dream of things that had never been done before.

Maker graduated with a bachelor’s degree in Chemistry and reached All-American status as a student-athlete, Ready to start his new life. Maker planned to head to Flagstaff, Arizona, to train for the 2012 Olympics.

The same day he left for Arizona in 2011 was the day South Sudan officially gained its independence.

“I drove the whole way celebrating, and it was a very special day that I will always remember,” Maker said.

Following his year of training, Maker qualified to run the marathon in the 2012 Olympics in London.

Even though South Sudan officially gained its independence, the country was not yet a member of the International Olympic Committee and Maker was still not an official U.S. citizen.

“State senators from New Hampshire and Arizona presented my case to the Senate in Washington D.C. so the International Olympic Committee allowed me to run in the Olympics without a country,” Maker said.

Even though his dream of running for South Sudan had not yet come true, Maker accomplished a great deal as an unaffiliated Olympian.

“All of the people in South Sudan knew where I was from,” Maker said. “I wanted to be the inspiration for the children to say, ‘Hey, if Maker can do it, you know what, I can do it too.’”

After the 2012 Olympics, Maker was undeterred and set a new goal for himself and his country.

“I said to myself, ‘In 2016, I’m going to bring South Sudan to the Olympics for the first time,’” Maker said. “I wanted to try to do more for my country and the 2012 Olympics only strengthened my conviction to accomplish my goal.”

This time around Maker’s dream became a reality in Rio de Janeiro 2016 when he became one of three athletes to be the first to represent South Sudan in Olympic games, as well as South Sudan’s flag bearer for the opening ceremony.

“Walking into that stadium, carrying the South Sudan flag was just indescribable,” Maker said. “The people of South Sudan were in my mind the whole time I was running into the stadium with that flag, and it meant so much to me.”

While it was a truly incredible and improbable moment for Maker, his thoughts were filled with the people of his home country while he was running with that flag.

“Over 50 years of civil war and my country finally got independence,” Maker said. “So many lives were lost for our freedom, it was just ringing in my head that we have done it, we have done it. On that day, everyone in South Sudan was at peace watching the Olympics for the first time.”

The 2016 Olympics were an enormous accomplishment for the former slave and South Sudan native that went far beyond his 82nd overall finish.

“I couldn’t have accomplished any of it without all the support I received from my family and the opportunity the United States gave me. It’s the highlight of my athletic career so far and a moment I’ll treasure forever.”

The next chapter in Maker’s life began when he decided to join the U.S. Air Force to serve the country that gave him so many opportunities.

“All of the things I’ve accomplished have derived from the opportunities the U.S. has afforded me,” Maker said. “When I first came to America, I didn’t have hardly anything, but with the support and opportunity this country has given me, I’ve been able to completely change my life.”

The staff at basic military training had no idea who Maker was, but he quickly stood out to leadership at the 324th Training Squadron.

“I went out to the track and saw the instructors were putting their attention on one trainee in particular,” said Maj. John Lippolis, 324th TRS director of operations. “I could see him running noticeably faster than everyone else and the instructors explained to me that we had a two-time Olympian at BMT.”

In addition to Maker’s Olympian status, his unique personal story also stood out.

“I was just absolutely floored when I talked to him about what he went through to get to where he is today,” Lippolis said. “Not only did he survive, he wanted to better himself and he has accomplished so much. He has an amazing story and the drive he has displayed to succeed like that in the face of such adversity is truly inspiring.”

Maker not only inspired Lippolis, but other members of his flight were inspired too.

“All of his wingmen said the same things when I talked to them,” Lippolis said. “They told me what an inspiration he was within the flight; that they rallied around him. They said he doesn’t do anything he’s supposed to do for himself until he helps out everybody else.”

While Maker has accomplished a great deal in his lifetime, he’s not done dreaming.

“Joining the greatest Air Force in the world has been an absolute miracle,” Maker said. “I can’t wait to see what this next chapter holds for me.”