WASHINGTON — It’s been 10 years since the F-117 Nighthawk retired, an aircraft so secret Nevada folklore labeled it a UFO.

The Nighthawk pilots were known by the call sign “Bandit,” each earning their number with their first solo flight. Some of the maintainers were also given a call sign, said Wayne Paddock, a former F-117 maintainer currently stationed at Holloman Air Force Base, New Mexico.

“The people who maintained the coatings on the aircraft radar absorbent material were classified as material application and repair specialists. MARS morphed into Martians,” Paddock said “MARS was a shred out from the structural repair/corrosion control career field.”

The technology for the F-117 was developed in the 1970s as a capability for attacking high value targets without being detected by enemy radar. It had up to 5,000 pounds of assorted internal stores, two engines and could travel up to 684 mph.

“It was the first airplane designed and built as a low-observable, stable and therefore precise platform,” said Yancy Mailes, director of the history and museums program for Air Force Materiel Command at Wright-Patterson AFB, Ohio, and a former F-117 maintainer.

“It was the marriage of the GBU-27 to the F-117 that had a laser designator in its nose that made it such a precise, deadly platform,” Mailes said. “It was best demonstrated during Operation Desert Storm when pilots snuck into Iraq and dropped weapons down the elevator shaft of a central communications building in Iraq.”

The first Nighthawk flew June 18, 1981, and the original F-117A unit, the 4450th Tactical Group (renamed the 37th Tactical Fighter Wing in October 1989), achieved initial operating capability in October 1983. The Nighthawk originally saw combat during Operation Just Cause in 1989, when two F-117s from the 37th TFW attacked military targets in Panama. The aircraft was also in action during Operation Desert Shield.

Retired Col. Jack Forsythe, remembers being excited when he initially flew a Nighthawk while stationed at Holloman AFB in 1995.

“It was a unique experience,” he said. “It’s probably the same feeling that a lot of our (single seat) F-22 (Raptor) and F-35 (Lightning II) pilots feel today.”

After 25 years of service, the Nighthawk retired April 22, 2008. Forsythe led the four-ship formation to Palmdale, California, where Lockheed Martin staff said their farewells.

“We lowered the bomb doors of each aircraft and people signed their names to the doors,” Forsythe said. “It was really just kind of neat; they had designed it, built it and maintained it for these 25 years, so it really hit home – the industry and Air Force partnership that made the Nighthawk great. I think the four of us were just really struck by that and have some really great memories of that flight.”

The American flag was painted on the entire underside of his F-117 by the maintainers to help celebrate American airpower.

“I think we all recognized that this was something historic,” he said. “We retired an airplane that people still reference today. We really understood that so it was a sentimental flight to say the least. It was a great weapon system, very stable and easy to fly. It’s still a memorable experience.” 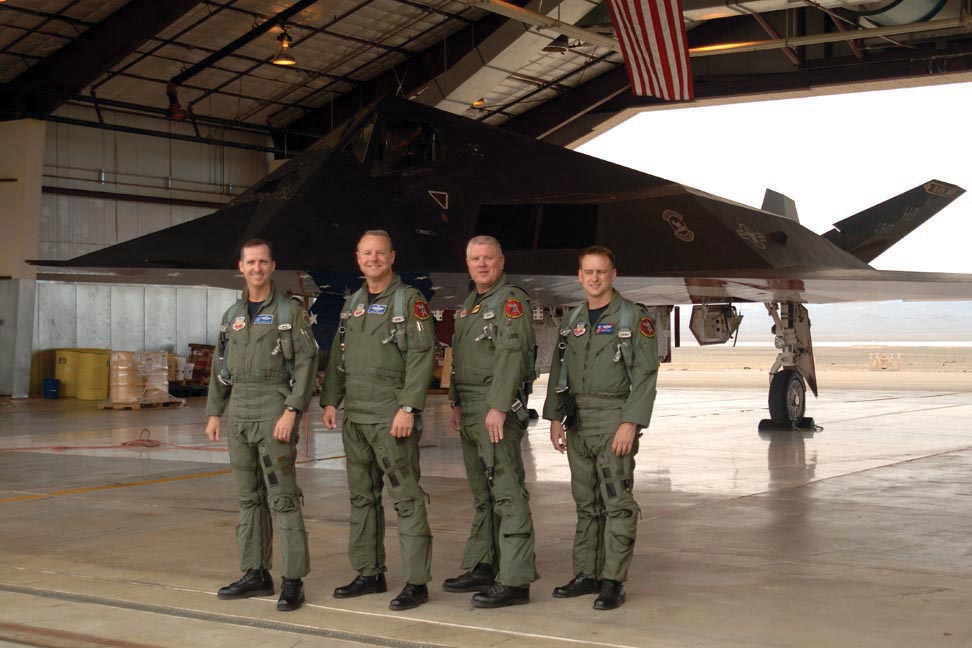 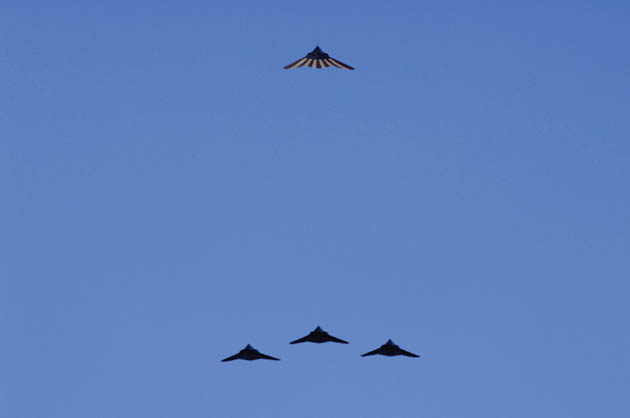 Four F-117A Nighthawk’s perform one last flyover at the Sunset Stealth retirement cerermony at Holloman AFB, N.M., 21 April 2008. The F-117A flew under the flag of the 49th Fighter Wing at Holloman Air Force Base, New Mexico from 1992 to its retirement in 2008.