Holt, combat operations division space control branch chief for the 614th Air Operations Center at Vandenberg Air Force Base, California, is a cyclist and past member of the World Class Athlete Program.

“As an Airman, it has been difficult to juggle a career with increasing rank and responsibility, family and inevitable aging,” said Holt, who began cycling competitively at the U.S. Air Force Academy and who was also honored as the Air Force Male Athlete of the Year in 2009. “In many ways, being recognized as the 2017 Air Force Athlete of the Year is more special and satisfying in the twilight of my (sports) career.”

“As an Airman, I never would have had the opportunities and motivation to pursue the level of competition that I ultimately reached without the underlying theme of representing my country and the Air Force,” said Holt.

Competing in an endurance sport such as cycling requires extreme dedication and time commitment, as well as significant amounts of readiness and resiliency, he said.

Holt’s readiness and resiliency were tested like never before during a life-threatening crash at the International Tour de Gila last year in New Mexico.

A freak accident sent Holt hurtling off a mountain at more than 30 mph into the Gila National Forest pine trees. He suffered severe bone bruises, tore both posterior cruciate ligaments in his legs and a finger was severed to the tendon.

Despite the injuries, Holt managed to climb the 30 feet up to the road to seek help. He spent three hours in the emergency room to nurse his injuries, yet managed to make his flight home and report to his duty station the next day.

In October, he capped five months of rehabilitation with two bronze medals at the Masters Track World Championships.

“The character traits and requirements to be a great athlete are directly applicable to military service,” Holt said. “Commitment, attention to detail, perseverance and honesty are the markers of great athletes and Airmen. The Air Force must embrace these traits and people because they have the ability to carry the service on their backs.”

“As an Airman, I share this award with my teammates,” said Hall, who played at Embry-Riddle Aeronautical University in Daytona Beach, Florida, before she was commissioned as a second lieutenant in 2012. “Personally, it shows that my hard work and dedication on and off the court is paying off. Volleyball has and continues to open doors for me that I would not have known otherwise. The experience of playing for the Air Force and Armed Forces is more than I could have imagined, and I’m always thankful for the opportunity to grow and play in the sport that I love.”

Hall’s playing and coaching experience complemented her readiness and resiliency during the Armed Forces Tournament and the World Military Games.

Hall, normally an outside hitter, was asked by Coach Nicki Holmes to play middle hitter during the Armed Forces Tournament. She not only filled that role, she thrived, as Air Force won five straight matches to win the gold medal.

“Middle hitter requires the ability to read the game,” Hall said. “Thankfully, with the coaching staff’s help and pulling from my own coaching experience, knowledge, and familiarity of the game, I was able to fill that role.”

Perhaps Air Force’s most memorable match was against the U.S. Navy for the championship. Air Force led 2-0 and was down 24-12 in the third game, but reeled off 14 straight points to win the title.

Holmes approached Hall again and asked her to fill a setter role on the All-Armed Forces Team.

“He knew I could set because the previous year I was the setter for our USAFE team, but I never imagined I would be a setter at this level,” Hall said. “Setter is like the quarterback of the team, so I had to be resilient and change up my leadership style to run our plays.”

Hall said she learned more about herself as a volleyball player this past year than any other.

“It was frustrating, and my mental game was challenged,” Hall said. “But as an Airman, when I was called, I knew my role and I was ready for the challenges.”

“I come back to my duty station a better officer and leader with new tools in my belt,” she added. “I think Air Force Sports is a great opportunity to continue to grow as an athlete but also as an Airman.”

To learn more about the Air Force Sports program or to apply for a spot on one of the teams, visit http://www.myairforcelife.com/Sports/. 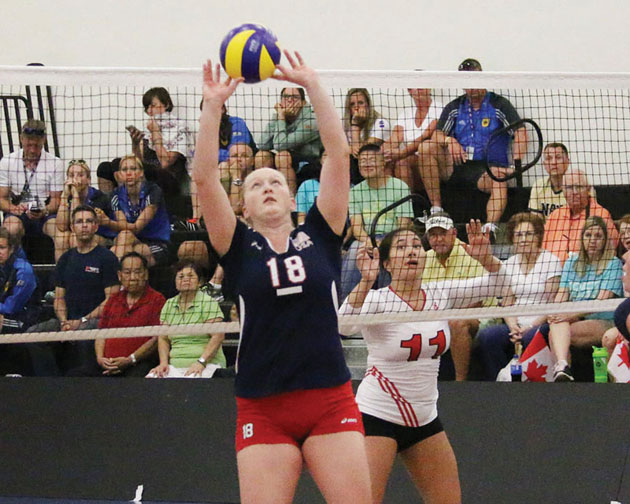 Capt. Abby Hall was named the Air Force Female Athlete of the Year.