Is my water safe?

Yes, the water is safe! We are pleased to present the 2017 Annual Water Quality Report (Consumer Confidence Report) as required by the Safe Drinking Water Act. This report is intended to provide a detailed look at the Davis-Monthan Air Force Base drinking water program, Public Water System ID#AZ0420549, and what the D-M AFB drinking water team does to provide safe drinking water.

Where does my water come from?

D-M AFB supplies drinking water to around 20,300 customers/base residents each day. This water is pulled directly from the Fort Lowell Aquifer via eight groundwater wells located throughout the base and is monitored by personnel from the 355th Fighter Wing.

Source water assessment and its availability

All drinking water is chlorinated for disinfection, which kills bacteria and microorganisms that may be in the water. On a monthly basis, the Bioenvironmental Engineering Flight monitors the base drinking water to ensure chlorination, acidity, and bacteriological contamination levels fall within an acceptable range. Additional sampling is performed on a periodic basis for other contaminants to ensure our drinking water remains compliant with safety regulations set by the Environmental Protection Agency.

Based on the information currently available on the hydrogeologic settings and the adjacent land uses that are in the specified proximity of the drinking water source of this public water system, the Arizona Department of Environmental Quality has given a high-risk designation for the degree to which this public water system drinking water source is protected. A designation of high risk indicates there may be additional source water protection measures which can be implemented on the local level. This does not imply that the source water is contaminated nor does it mean that contamination is imminent. Rather, it simply states that land use activities or hydrogeologic conditions exist that make the source water susceptible to possible future contamination. Further source water assessment documentation can be obtained by contacting ADEQ.

How can I get involved?

Why are there contaminants in my drinking water?

As water travels across the surface of the land and seeps through the ground, it picks up naturally occurring minerals and, in some cases, naturally occurring radioactive materials. Additionally, it can pick up any number of substances resulting from the presence of animals or human activity. These range from viruses or bacteria found in water treatment plants and septic systems, inorganic and organic compounds, either naturally occurring or occurring as a result of industrial operations, and chemical contaminants such as pesticides and herbicides from farms.

The EPA sets safety limits on these contaminants in public water systems in order to ensure safe drinking water is provided to the customer. Drinking water, including bottled water, may reasonably be expected to contain at least small amounts of some contaminants; however, this does not necessarily indicate that the water poses a health risk. For more information about contaminants and potential health effects, call the Environmental Protection Agency’s Safe Drinking Water Hotline at 800-426-4791.

Do I need to take special precautions?

Some people may be more vulnerable to contaminants in drinking water than the general population. Immuno-compromised persons such as individuals with cancer undergoing chemotherapy, individuals who have undergone organ transplants, people with HIV/AIDS or other immune system disorders, some elderly, and infants can be particularly at risk from infections. These people should seek advice about drinking water from their health care providers.

Were there any monitoring failures or violations?

There were no monitoring failures or violations during 2017. In the event that a violation or waterborne emergency occurs, the Bioenvironmental Engineering Flight will deliver information about protecting community health through the media, mailings, the web page and other alert systems.

The Bioenvironmental Engineering Flight did not conduct water sampling for Volatile Organic Compounds at four sites during the triennial period Jan. 1, 2012, through Dec. 31, 2014. This resulted in a violation for our drinking water system. The four sites were sampled for VOCs on Dec. 10, 2015. All results came back negative for all VOCs and the violation was closed. These violations were not posted until 2016, and compliance had already been achieved.

Were there any contaminants detected in my drinking water?

All sources of drinking water contain some naturally occurring contaminants. In order to ensure that tap water is safe to drink, the EPA prescribes regulations which limit the amount of contaminants allowed in water provided by public water systems. At low levels, these substances are generally not harmful in our drinking water. Removing all contaminants would be extremely expensive, and in most cases, would not provide increased public health protection. The EPA or the state requires us to monitor for certain contaminants less than once per year because the concentrations of these contaminants do not change frequently.

The Water Quality Data table lists all detected drinking water contaminants. Unless otherwise noted, the data presented in this table is from testing done within five years of the report. A majority of regulated contaminants that were not detected are not included in the table. Thus, only those substances listed below were found in your water. 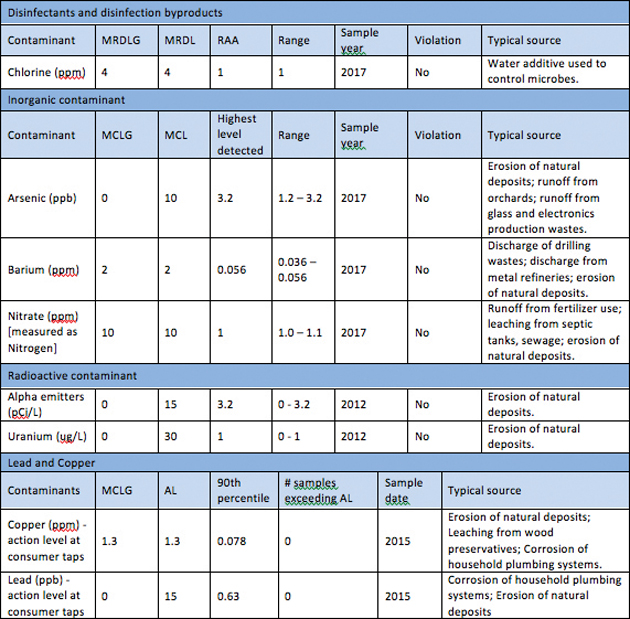