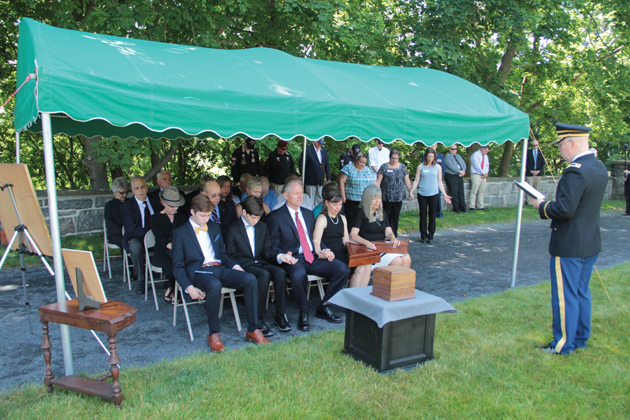 His wife, Sharon Cook, and daughter, Katherine White, were in attendance. Katherine was less than a year old when her father went missing.

“When we were in high school, he was always incredible at sports,” said Cook. “It could be a game where they were losing and the odds seemed impossible, that seem to drive him even more. Early on I expected him to knock on the door any day. I figured if anyone could make it, it would be him.”

According to the Defense POW/MIA Accounting Agency, White, a 357th Tactical Fighter Squadron fighter pilot, was in a flight attacking enemy troops when weather conditions deteriorated and contact with him was lost after his first pass. When wreckage was sighted four days later, a ground team searched the area and found small pieces of wreckage, but no remains were recovered.

White was later declared missing in action. He was not accounted for until recently, when scientists from DPAA and the Armed Forces Medical Examiner System used mitochondrial DNA analysis, dental and anthropological analysis, as well as circumstantial evidence to identify his remains.

The headstone he will be buried under reads, “Missing in SE Asia.” His father, Air Force Maj. Gen. Edward H. White, West Point Class of 1924, and his mother Mary Haller White, are named on the same stone.

His brother Air Force Lt. Col. Edward H. White II, is buried one stone away. His stone says, “First American to walk in space.” He was an astronaut killed Jan. 27, 1967 while rehearsing on the launch pad for the upcoming Apollo I launch. A fire broke out in the capsule killing him, Virgil Grissom and Roger Chaffee.

“Inspired by his brother’s accomplishments, Jim also wanted to enter the space program and to do that you needed to be a test pilot,” said Lt. Col. Robert Marsi, West Point garrison chaplain. “To be a test pilot he needed flight time in combat and volunteered for service in Vietnam.”

“I am proud to join you all here today in honoring Maj. James Blair White, an American hero,” Marsi said.