SAIPAN, Northern Mariana Islands — On Oct. 25, Daverrick Camacho, a firefighter from Saipan, woke-up to a nightmare turned reality. Everything he worked toward was wiped off the face of the earth. The place he called home and held family gatherings was nothing more than darkly twisted debris, scattered across the front lawn.

Camacho was grateful that his family was safe, but soon realized they survived Super Typhoon Yutu. The strongest tropical cyclone ever to pass over the Commonwealth of the Northern Mariana Islands, or CNMI, Saipan and Tinian, equivalent to a Category 5 hurricane.

As he assessed the damages, he felt sick to his stomach. He lost pictures of deceased loved ones and family heirlooms that were irreplaceable. The burden of the world felt like 200-pound weights mounted on his shoulders.

He gathered himself and walked to a tent his family pitched and heard, “Dad I guess today is a great day for camping.” Everyone laughed and something beautiful happened in the darkness. He noticed a sign his kids painted that read “CNMI We Got This!”

That same day, the Air Force called their “Ace in the Hole” unit to support relief operations in Saipan and Tinian. Before the call, the unit was performing humanitarian assistance operations in Balikpapan and Palu, Indonesia, in response to a magnitude 7.5 earthquake and tsunami that left 2,000 dead and 435,000 displaced.

The 36th Contingency Response Group from Andersen Air Force Base, Guam, has been on back-to-back humanitarian and relief missions since Oct. 4, encompassing four islands.

“It’s nice to see the military respond so fast, it’s like having an airshow in our backyard,” Camacho said.

The 36th CRG incorporates more than 30 different jobs into one close-knit team. It is a rapid-deployable unit designed at the initiative of Air Force leaders to be a “first-in” force to secure an airfield and establish and maintain airfield operations.

The group is comprised of the 36th Mobility Response Squadron, the 554th RED HORSE Squadron, the 644th Combat Communications Squadron, and the 736th Security Forces Squadron.

“I know I have asked a lot from our guys, especially with the 24-hour notices we received, but I also know what we’re capable of and our diverse skill sets,” said Col. Daniel Roesch, 36th CRG commander. “Our work could mean the difference between life or death.”

A small footprint with huge impact

Since Oct. 5, the 36th CRG has managed airlift for 211 sorties, 1,427 passengers, and partnered with 14 countries to transport 702 displaced people to safety. They have offloaded and downloaded 15 million pounds of humanitarian and recovery supplies for the U.S. Agency for International Development, and Federal Emergency Management Agency missions so far.

“Experiences like these remind me that we have the best Airmen in the Air Force in the 36th CRG,” said Chief Master Sgt. William Hebb, 36th CRG superintendent.

All supplies delivered to the four islands were coordinated, directed, packed, offloaded and downloaded by 36th CRG members. For the missions to be successful, each person was required to not only know their job but the person’s job to their left and right.

They train and prepare for worst-case scenarios, such as someone getting sick or needing to forward deploy. The built-in redundancy is practiced at home station to not only make the member more diverse, but ensure the mission will not be affected.

A mixture of happy and sad tears

At first glance, you would never know these men and women completed such monumental tasks. At closer look, their eyes, faces, and hands reveal the truth. Destruction, heartache, wind burns, sun blisters, fatigue and working 12 to 14-hour shifts in 100-degree weather, took a physical and emotional toll.

On a few occasions, members had tears in their eyes after they were told thank you by people who lost everything.

“When I look at the news or I meet people affected by the typhoons, earthquakes, and tsunamis, I think about my family and I get emotional because this can happen to anyone,” said Master Sgt. Jaime Almquist, 36th Mobility Response Squadron contingency response team chief. “If I must work an 18-hour shift to get people the supplies they need, I’m honored to do whatever I can because they’re now my family, and it’s our responsibility.”

What the future holds

Any time somebody says “36th CRG,” members belt “Send me!” It’s not just a chant to inspire troops, but a request. Each member in the group wants to contribute to every mission, Roesch said, and is disappointed when they’re told to take a knee.

“One of my priorities as commander is to either have myself, squadron commanders or my group chief out with our teams when possible,” Roesch said. “I know we have strong leadership through our officer ranks down to our youngest Airmen, but our collective teamwork allows us to tackle objectives and readjust to obstacles we’ve faced.”

With the backing and support from USAID, FEMA, U.S. Indo-Pacific Command, Pacific Air Forces and 36th Wing, the sky is the limit for humanitarian relief operations.

Haden highlights the fact that it’s rarely a solo operation, but a joint, multinational and interagency collaboration.

Camacho and his family have taken to rebuilding what they’ve lost.

“One day at a time, we’re slowly transitioning from survivor mode,” Camacho said. “My family is healthy, and we now have FEMA tents and running water. Thank you all for leaving your family to help mine.” 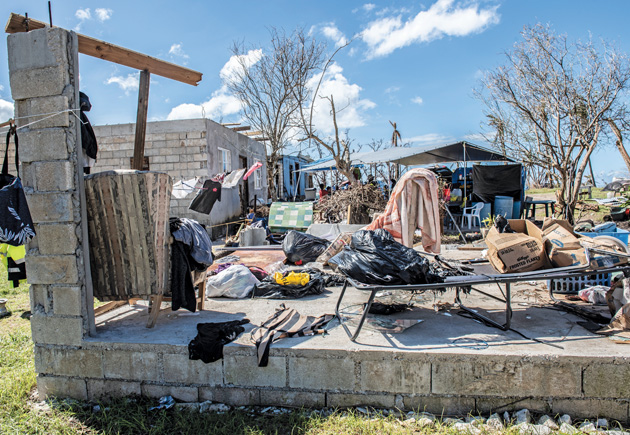 A picture taken of what used to be Daverrick Camacho’s bedroom in the southern part of Saipan, Commonwealth of the Northern Mariana Islands (CNMI) Nov. 3, 2018. It serves as an illustration of destruction caused by Super Typhoon Yutu Oct. 25, 2018. Many families lost everything during the typhoon and are coping by living in tents. 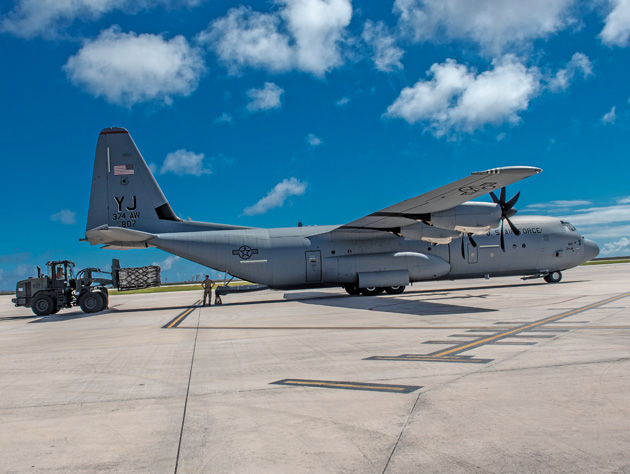