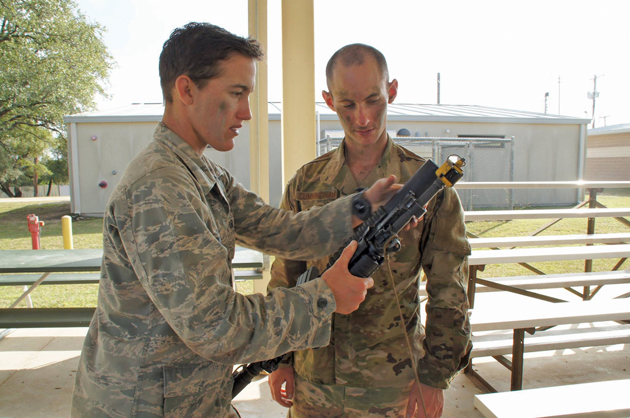 JOINT BASE SAN ANTONIO-LACKLAND, Texas — Imagine signing up to be starved, sleep deprived and trying to fight for survival during a 19-day combat leadership course in the mosquito-, rattlesnake- and wild boar-infested hilly terrain north of San Antonio with 28 other Airmen.

This was the scenario for 29 Airmen who took part in the Ranger Assessment Course at Camp Bullis, Texas, Oct. 29 – Nov. 16. Upon successful completion of RAC, the Airmen would have a chance to enroll in the coveted, yet even more grueling, Army Ranger Course.

One of the 12 instructors, Tech. Sgt. Gavin Saiz from the 435th Security Forces Squadron at Ramstein Air Base, Germany, said RAC is a combat leadership course emphasizing doctrine that uses a host of tactical and technical procedures to instruct the students, who have to learn and apply a firehose of information in a short period.

Qualified Airmen from any career field can attend the course, which is held twice a year. Efforts are underway to see if the course can be expanded to four times a year, in order to conduct them in U.S. Air Forces in Europe and Air Forces Africa and Pacific Air Forces. If the applicant is physically and mentally qualified, they can enroll in the course, but not everyone makes it to the finish line. The course has a 66-percent fail rate.

Since 1955 when the Army began accepting Airmen into its school, nearly 300 Airmen have earned the Ranger tab. The Army Ranger Course is one of the Army’s toughest leadership courses, with a concentration on small-unit tactics and combat leadership. The course seeks to develop proficiency in leading squad and platoon dismounted operations in an around-the-clock, all-climates and terrain atmosphere. RAC is based on the first two weeks of the Army Ranger Course.

Capt. Nicholas Cunningham, 741st Missile Security Forces Squadron, Malmstrom AFB, Montana, was one of five students selected for the Ranger Training Assessment Course (RTAC) which is a dynamic two-week spin up to acclimate Army and sometimes joint or partner service members to the rigors of Ranger School.  If he successfully completes that course, he may be referred to Army Ranger School. ”The course taught us tons of lessons about working as a team, pushing past mental limits and mostly leadership,” he said. “Where we as Ranger students at first were acting as individuals, we had to shift toward operating together as a single unit. The more we acted by ourselves, the worse we did as a team. To meet the objective, whether it was packing our clothes within a certain amount of time or assaulting an enemy force, required every Ranger to do their part of the task and then some.”

After the first week of classroom and hands-on training, Sloat said they select students for various leadership positions for the missions and then challenge them to plan, prepare and conduct missions, whether it is a recon or ambush mission. They plan backwards based on a higher headquarters Operation Order.

On the last day of missions, ten tired, hungry and cold Airmen made it to the finish line, having tested their mettle to the extremes. The 29 Airmen who began the course came from six major commands and represented security forces, tactical air control party, airfield management and battlefield Airmen specialties.

The first female to finish the course, 2nd Lt. Chelsey Hibsch from Yokota Air Base, Japan, has also been selected for RTAC.  She said she saw more individuals fail as a follower because they didn’t want to go out of their way to help their partners succeed. “Those who were good followers tended to have others follow them with more enthusiasm because they had each other’s backs,” she said. “You learn how you react when everything is against you. Some individuals pressed on and others froze.”

The Air Force Security Forces Center, one of the Air Force Installation and Mission Support Center’s subordinate units, hosted the course. The instructors, all having been through the course and graduated Army Ranger School, put the students through the mind-numbing days and nights. The instructors provide this stress-oriented battle school for Airmen to develop better leadership and command tools under the mental, emotional and physical strain and improve their resiliency and coping mechanisms.

Climbing to the top with Chief ingredients