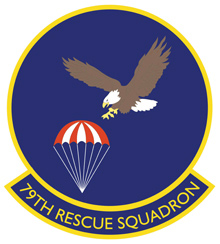 For the first time in its history, the 79th Rescue Squadron at Davis-Monthan Air Force Base, Ariz., earned the That Others May Live Foundation Rescue Squadron of the Year Award in 2018.

This annual award is presented to an active duty, Air National Guard or Air Force Reserve rescue unit that scores the highest in the categories of mission events, combat effectiveness, squadron accomplishments and community relations.

“It is very difficult to select a winner for this award,” said Heidi Meisterling, TOMLF Board of Directors member. “These rescue squadrons’ missions dictate that they be the best of the best, and it is our job as board members to determine which squadron rises above the others for that given year.”

From July 2017 to June 2018 the 79th RQS performed various stateside and deployed combat, humanitarian and training missions. Some of these operations included the facilitation of over 300 Texan evacuations and over 1,400 saves during the aftermath of Hurricane Harvey, readying three aircraft commanders and 40 ground troops for a Marine expeditionary unit deployment, and leading a personnel recovery task force that saved two partnered forces and captured seven high value individuals.

“Our primary mission is to support combatant commanders’ objectives, and we accomplish that through combat search and rescue,” said U.S. Air Force Lt. Col. Matthew Stueck, 79th RQS director of operations. “While this allows us to provide for the military, we also work to give back to the community as well.”

Through participating in several community events, such as blood drives and volunteering for events like the Redington Pass cleanup, the 79th RQS has improved the overall community cohesiveness of Davis-Monthan.

Though the 79th RQS proved to be the top Air Force rescue squadron of 2018, they do not let that prestige cloud their intentions.

“We gave ourselves a pat on the back, shared memories of the great things that happened the previous year and got right back to work after receiving the news,” Steuk said. “It’s great that we were recognized for our efforts, but we don’t do what we do to be recognized. Every rescue squadron out there plays a huge part in our line of work and we are all part of the same team.”

Thanks to their outstanding accomplishments, the 79th RQS has proven to be the top rescue squadron in the Air Force for 2018 and will continue their legacy of excellence for years to come.

Editor’s note: The mention of the nonprofit organization That Others May Live does not constitute endorsement or affiliation by Davis-Monthan Air Force Base or the U.S. Air Force.