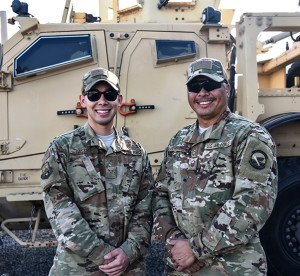 Senior Airman Anthony Castro and Master Sgt. Jonathan Herrera, assigned to the 380th Expeditionary Logistics Readiness Squadron Petroleum, Oil and Lubricants flight, pose for a photo at Al Dhafra Air Base, United Arab Emirates, Dec. 13, 2018. Castro is on his first deployment, while Herrera is potentially on his last deployment, as he’s nearing retirement.

Oftentimes in the Air Force, the phrase, “It’s a small Air Force,” is said due to the chances people have of running into one another again throughout their careers. This duo’s chances were smaller than usual, but it happened anyway.

From father and son, to senior NCO and Airman, Master Sgt. Jonathan Herrera and Senior Airman Anthony Castro, both assigned to the 380th Expeditionary Logistics Readiness Squadron Petroleum, Oil and Lubricants flight, are experiencing their first and last deployments together at Al Dhafra Air Base, United Arab Emirates.

It all started when Castro surprised his family at the age of 18 and decided to join the Air Force, allowing him to follow his father’s footsteps.

“It was interesting,” Castro said. “I never truly understood what exactly [my father] did until I joined. I used to always tell him I was never going to join the military, but as I graduated high school and was still uncertain of what exactly I wanted to do, I didn’t want to just sit around and waste time. My dad would always tell me even if I wasn’t going to make it a career, it’s still something I should consider for a foundation to build on.”

As he took that chance and began his Air Force career, Castro and Herrera’s paths intertwined even more. Castro got assigned the same Air Force Specialty Code as Herrera, sending him to Sheppard AFB, Texas.

After a few weeks of learning his new craft as a fuels specialist, Castro received orders to the 355th Logistics Readiness Squadron Petroleum, Oil and Lubricants flight at Davis-Monthan Air Force Base, Ariz., where his dad was already assigned.

“When Anthony called me from tech school and told me he had an assignment, I took five guesses and they all were wrong,” Herrera said. “I said ‘Well then, where are you going?’ and his reply was, ‘What time do I have to report to work on Oct 12?’ I was really excited for he and I being stationed together, however, I would have been okay with him venturing out to see the world. I mean most of us came in to travel, right?’” 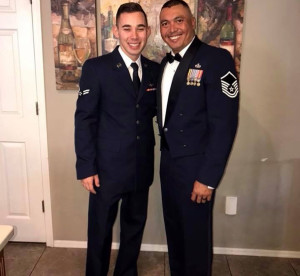 With Herrera’s many years of military experience, Castro already knew from a young age that there are boundaries between the Castro-Herrera family and Air Force family.

“Growing up, he coached me often in baseball and soccer and it was the same concept with separating ‘coach’ and ‘dad,’” Castro said. “We have always had a close relationship but I would have to say it has brought us closer. I can talk to him about work and he completely understands how I feel, as well as give me advice from similar situations he’s had. He is always challenging me to be a better Airman than he was.”

“By the way, Mom and Dad didn’t meet him at the airport,” Herrera said. “He was assigned a sponsor to pick him up from the airport and take him to his dorm room, like any other Airman arriving at their first duty station. After he was settled in, he called my wife and asked if he can come to the house and pick up his car.”

As the puzzle pieces began to fall into place, the pair ended up being deployed together at the same time, making this another rare and amazing opportunity for the both of them.

“It is an honor to say the least,” Castro said. “Growing up, I would always see the pictures from his past deployments of a young and wrinkle-free Sergeant Herrera. Knowing that this is more than likely his last deployment, as he is nearing retirement, I am extremely blessed to be able to share the experience with him.”

Nothing has stopped the two, as their special bond continues ever since Castro and Herrera first met many years ago.

“Some may wonder why he’s a Castro and I am a Herrera,” Herrera said. “That is because Anthony spent the first three years of his life without his biological dad. Then when my wife, who was my girlfriend at the time, brought him into my life, it was special to know I could actually father a child. And for me to know he followed my path, it makes me feel so special and very proud of him.”

As a 17-year senior NCO, Herrera uses his experience to ensure that Castro doesn’t miss out on any opportunities to be treated like any other Airman in the shop. 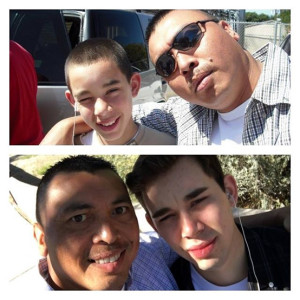 Jonathan Herrera and Anthony Castro pose for selfies in 2008 and 2016. Herrera and Castro are a father and son duo both in the Air Force, assigned to the same Air Force Specialty Code, same duty station at Davis-Monthan Air Force Base, Ariz., and now the same deployed location at Al Dhafra Air Base, United Arab Emirates.

“Anthony is just like any other Airman when we are wearing the uniform,” Herrera said. “Once we are outside of work and see each other, it’s like any father-son relationship. It was, and I’m sure still is, difficult for Anthony to call me Sergeant Herrera. Usually I get …’Excuse me, sir.’ There’s a lot of friendly banter that goes around the shop like, ‘Aww, look, Daddy is having lunch with his baby boy’. Fortunately, all members in the shop are really accepting to us as father and son. He is, however, in a different chain of command than my section. It’s also rewarding to see that his supervisors and leaders do not treat him any different.”

Watching his boy grow into a man isn’t the only thing that makes Herrera proud of Castro. His son benefits from the limited time they have together, whether it’s in a work setting or hanging out together.

“I try to stop by the house as often as I can, especially knowing there is going to be a time I get orders to somewhere else so I need to take advantage of it while I can,” Castro said. “We enjoy going golfing together, but we haven’t gone too often lately. He would say it’s because we both have busy schedules, but he and I both know he just doesn’t want to go because I’m getting better than him.”

This deployment allowed for a stronger connection between Herrera and Castro to grow, leading to a successful future.

“I think that my and Anthony’s relationship didn’t really change much,” Herrera said. “I allow him to take his career into his own hands and just remind him what made me successful in this career. With life in general, I know that he has made a good decision and that he has the right foundation to tackle any obstacle that gets in his way. I’m just blessed that I at least gave him something positive to look forward to. I also can’t wait for him to have the opportunity to venture away from the nest and enjoy his military career by seeing other parts of the world.”