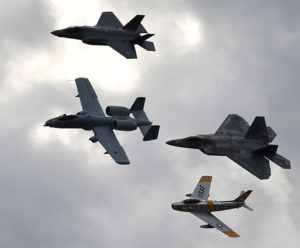 A U.S. Air Force A-10 Thunderbolt II, F-22 Raptor, F-35 Lightning II and an F-86 Sabre fly in formation together over Davis-Monthan Air Force Base, Ariz., March 2, 2019. These aircraft will perform in this year’s Thunder and Lightning Over Arizona air show, March 23-24.

The Thunderbirds, the U.S. Air Force Air Demonstration Squadron, will be headlining the event alongside Davis-Monthan’s very own A-10 Thunderbolt II Demonstration Team to exhibit the military’s air power capabilities.

“We are extremely excited to be performing at the show,” said Staff Sgt. Betty Chevalier, A-10 Demonstration Team public affairs lead. “We really want to show the Tucson community why the base is here and what the aircraft train for every day.”

While being widely known as an air show, the event is more than just that. Its goal is to recruit, retain and inspire, all while displaying what the military is capable of.

“It’s important to sustain the longevity and betterment of the Air Force by allowing the younger generation the opportunity to experience the possibilities of how they can contribute to the mission,“ said 2nd Lt. Lauren Gao, 355th Wing public affairs officer.

During the event, Davis-Monthan’s gates will be open to share with the community the integral part it plays by hosting a Military Open House. This event will give the public an opportunity to learn about the assets D-M operates and meet the men and women responsible for leading and maintaining these mission sets.

The event will also include flyovers from a U.S. Air Force F-22 Raptor, a C-17 Globemaster III and many other aircraft, along with a performance from the U.S. Air Force parachute team Wings of Blue.

Aircraft ground displays will be parked along a walkway giving visitors the opportunity to tour and learn about specialized aircraft, like the B-52 Stratofortress, the T-6 Texan II and the P-51 Mustang just to name a few.

Food and beverages will be on sale at the event, and for children, there’ll be a kid zone play area with bouncy castles and bungee trampolines.