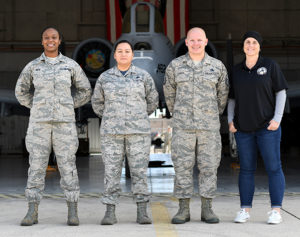 355th Wing Staff Agency Close Airmen Support team poses for a photo at Davis-Monthan Air Force Base, Ariz., March 15, 2019. Each team is comprised of members from the Mental Health clinic, Airmen and Family Readiness center, the Chapel, representatives from the Sexual Assault Prevention and Response office, and master resiliency trainers. Given the diverse mission set, Davis-Monthan AFB presents it is vital that the CAS teams are tailored to the individual needs of every group and squadron.

Davis-Monthan’s Airmen are known to be strong, resilient and hard-charging. Time and time again the base has proven to be one of the best and has never backed down from the high end fight.

The base and the Airmen have gone through many changes that have resulted in a higher operation tempo with very little room to fail. However, all of the hard work and dedication our Airmen provide can come at a cost.

Retired Chief Master Sgt. Vincent Howard, 355th Wing chief community support coordinator, along with commanders across the installation have taken notice to the effects these new challenges bring upon our Airmen and their families; and are taking action.

“A year ago the base leadership came together and expressed concern about the suicide rates,” said Howard. “We comprised a communication action team who was tasked with creating an initiative to drive down the rates of suicide, suicidal ideations and attempts; as well as find the audience that was at a greater risk where we could have the most impact.”

The team got together and collaborated on the issues that affect the resiliency of the base and the Airmen who maintain the lethality of Davis-Monthan AFB.

“We looked at the statistics from both the base and Air Force wide along with the civilian sector and found there were two areas where we could place our focus,” said Howard. “We know that substance abuse, alcohol related incidents, and domestic violence can be targeted to a specific rank, however, with suicide attempts, ideations, and completions we couldn’t focus on a single rank. So we had to look further.”

After a year of studying and research, Chief Howard and the CAT found there were two specific areas where the base Airmen were struggling that could lead to the self-destruction the commanders wanted to prevent.

“We found over 70 percent of cases involved broken or ineffective relationships,” said Howard. “Then we found that over 50 percent off the intent was not communicated.”
With this new research the team was able to determine what they needed to do to meet the commander’s intent.

“We wanted to gather agencies that could have a positive effect on communication skills and relationship building,” said Howard.

With this in mind, the CAT developed the Close Airman Support team initiative. Each team is comprised of members from the Mental Health clinic, Airmen and Family Readiness center, the Chapel, representatives from the Sexual Assault Prevention and Response office, and master resiliency trainers.

“Each agency agreed to give up members that they felt would have a positive impact on these targeted areas. And each group is given dedicated CAS members with a first sergeant as the lead,” said Howard.

The intent is to have the lead first sgt. meet with their group’s leadership to determine what areas the CAS team needs to focus on. Given the diverse mission set Davis-Monthan AFB presents, it is vital that the CAS teams are tailored to the individual needs of every group and squadron.

“There are eight CAS teams across the base, each dedicated to their own group,” said Howard. “It’s up to the group how often the CAS team will come in and provide those services the Airmen need.”

As this initiative is still new, there is plenty of room for it to grow and expand on. However, Howard is confident that over time it will prove to be the life-saving vital resource our Airmen need to continue the high end fight and maintain readiness as well as lethality.

“We want to recognize an issue before something goes wrong,” said Howard. “We may never know if we saved a life, because an Airman could be fine right now, but in six months they may have those suicidal ideations. But if we catch the issue beforehand, then that Airman will continue completing the mission and feel taken care of.”