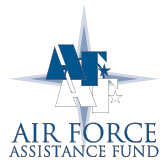 The Air Force Aid Society is the official charity of the U. S. Air Force. Founded by General Henry “Hap” Arnold, AFAS has been helping families since 1942. AFAS provides emergency financial support for short-term financial stresses, offers six million dollars in scholarships and grants annually, and provides community support through Airmen and Family Readiness Center programs, such as the Spouse Employment Program, Bundles for Babes, and child care services. This charity directly contributes to the welfare of our Active Duty and Reserve Airmen.

The General and Curtis E. Lemay Foundation gives financial aid in the form of grants to widows and widowers of all Air Force retirees. This organization began as an attempt to start housing programs at Offutt AFB, Neb., and has grown to support all Air Force widows and widowers requiring financial assistance. General and Mrs. Lemay started the program bearing one motto in mind: “Taking Care of Our Own.”

The Air Force Villages Charitable Foundation, now Blue Skies of Texas, provides housing for widows of retired Air Force officers. Opened in 1970, this retirement community has provided housing for over 600 surviving spouses. Since 2014, the community now accepts other Air Force retired seniors including those of civilian careers.

Davis-Monthan AFB Airmen are asked to consider contributing to this worth-while organization. The AFAF accepts one-time donations. Participants may donate to one or more charities at a time and may pay with cash or check. Payroll deduction plans are available to as little as one dollar per month for up to twelve months.