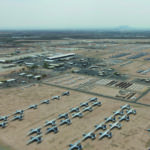 309th Aerospace Maintenance and Regeneration Group
History: Immediately after World War II, the Army’s San Antonio Air Technical Service Command established a storage facility for B-29 and C-47 aircraft at Davis-Monthan AFB. Today, this facility is the 309th Aerospace Maintenance and Regeneration Group, which has grown to include more than 4,400 aircraft and 13 aerospace vehicles from the Air Force, Navy-Marine Corps, Army, Coast Guard, and several federal agencies including NASA.
Mission: A one-of-a-kind specialized facility within the Air Force Materiel Command structure, it provides critical aerospace maintenance and regeneration capabilities for Joint and Allied/Coalition warfighters in support of global operations and agile combat support for a wide range of military operations.

They perform precision aerial maneuvers while highlighting the mission and professionalism of the men and women of the United States Air Force. Additionally, the team brings attention to our proud history by flying formations with historical aircraft in the Air Force Heritage Flight. 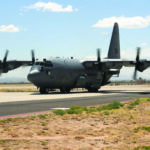 41st and 43rd Electronic Combat Squadrons
The 41st Electronic Combat Squadron was activated at D-M in July 1980 and the 43rd Electronic Combat Squadron was activated at D-M April 1, 1992. Accomplishing the Compass Call mission, both squadrons provide vital capabilities in the realm of electronic warfare for the Air Force and are poised for immediate deployment to specific theater contingencies. The unit’s combat mission is to support tactical air, ground and naval operations by confusing the enemy’s defenses and disrupting its command and control capabilities. However, they each have a different area of responsibility. Both squadrons operate the EC-130H aircraft, a specially configured version of the Air Force’s proven C-130 transport. To execute its unique missions, the aircraft were modified with electronic countermeasures systems, specialized jamming equipment, the capability to aerial refuel, as well as upgraded engines and avionics. Modifications made to the aircraft vary between the two squadrons, to help each squadron meet its specific mission-oriented needs.

Face of Defense: Soldier spreads joy through love for piano