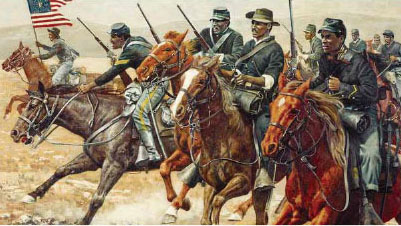 ROYAL AIR FORCE LAKENHEATH, England — When I think of the legacy of African-American slavery in colonial America, I see a truly universal story.

I see a story of how Africans were forced into slavery in a new world, and how they desired to reclaim their individual freedom and the human identity they had once known.

The pursuit of freedom from slavery lasted more than 400 years. During the European slave trade, millions of Africans’ lives were lost in mass murders, wars, forcible transfer of populations and the brutal rigors of slavery itself.

More than 12 million African slaves were brought to colonial America between the 16th and 19th centuries by their colonial captors, where African-American slaves were stripped of any legal rights. The slave’s greatest legal difficulty was that, not only was he or she not considered a person, African-Americans became property as well. This racial inequality justified the institution of slavery in early America. As a result, the slave-labor system became an ironclad way of life that was inextricably tied to the social, political and economic foundations of a growing America.

The enslavement of African-Americans was based on economic reasons, but it also rested in racism as an ideology. Racism, as an ideology, became a major reason for African-American enslavement. These conditions existed soon after English colonists first settled in Virginia in 1607 and lasted as a legal institution until the passage of the 13th Amendment was added to the U.S. Constitution in 1865.

During the American Revolutionary War, African-American slaves saw their individual freedom from bondage inevitably tied to the colonists’ fight from British rule. African-Americans fought alongside the colonists to reach a common goal of “unalienable rights” – life, liberty and the pursuit of happiness – for themselves and their families. At the end of the Revolutionary War, a young and victorious America did not fulfill its promise entirely and allowed racial slavery to remain.

From the end of the American Revolution to 1865, African-American slaves created a plan; they would seek freedom by any means necessary in the new America. They used means such as the Underground Railroad. They sustained acts of defiance against the prevailing slave codes. They also garnered the support of the abolitionist movement, led revolts against slave overseers and finally fought alongside the union during the American Civil War.

By the end of the American Civil War, Abraham Lincoln implemented The Emancipation Proclamation, officially ending slavery in America. This new equilibrium enabled freed African-Americans to experience a self-revelation. It was a tangible awareness that their freedom as individuals was restored.

As a people, African-Americans regained a human identity lost during slavery. This new identity provided the foundation for African-Americans to move forward from bondage to freedom, enabling them to shape their destiny in a new world.

AZNG helps provide COVID-19 vaccinations to phase 1a, 1b patients

AZNG helps provide COVID-19 vaccinations to phase 1a, 1b patients