These qualities are what make up the Airmen of the 944th Fighter Wing. Qualities that were demonstrated from generations past. During their tenure with the 944th, the legendary 301st and 302nd Fighter Squadrons left their shining legacy permanently embedded into the ranks of their former home.

Originally, part of the 332nd Fighter Group, the first all-African American fighter group in the United States Army Air Corps, the legendary Tuskegee Airmen, knew better than anyone the hard work and grit it took. The 301st and 302nd squadrons were activated in 1942 at Tuskegee Army Air Field, Alabama, but it was not until their arrival at Selfridge Field, Michigan, the following year that they finally got a chance to show their talent.

The two legendary squadrons began training pilots in what was probably the most rigorous and selective pilot training program in the Army Air Corps at the time. But their persistence paid off. In early 1944 the two squadrons, along with the rest of the 332nd Fighter Group, were transferred to Italy. There, they became engaged with various combat missions for 12th Air Force. Their involvement aided in clearing a path for Operation Torch, the Allied invasion of North Africa. 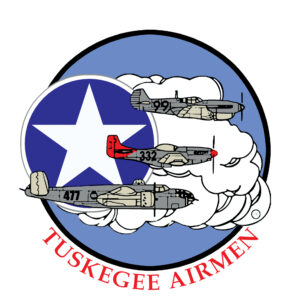 A few months later they were transferred to 15th Air Force and began escorting bombers over Germany, Poland, France and many other locations in Nazi-occupied Europe. They were also responsible for attacking enemy supply lines, military targets, railway lines, and other valuable enemy targets scattered across Europe.

The members of these squadrons began painting the tails of their planes a distinctive red color for identification purposes and thus received the nickname “Red Tails” by their Allied counterparts. The German Luftwaffe also had a name for them: “Schwarze Vogelmenschen,” translated to “Black Birdman,” because of their natural skills in the air. They gained the respect they deserved within the ranks of other Allied flying squadrons and created fear in the minds of the enemy. The Tuskegee Airmen exemplified themselves as heroic pilots and pioneers in breaking the discriminating and restricting racial barriers in America. Their escort missions had an impressive combat record, having only minimal losses during their missions.

On March 24, 1945, the squadrons were escorting a group of B-17 bombers during a raid on the Daimler-Benz tank factory in Berlin. They were overcome by a wave of enemy aircraft but fought them off which allowed the bombers to complete their mission. For the victory of this mission and the skill and bravery shown by the Red Tail pilots, they were awarded a Distinguished Unit Citation.

For more than 75 years, the legacy of these courageous Airmen has shown what it means to sacrifice for a moral and just cause. They have been symbols in standing up for what is right and proving that judging others without cause is wrong. The heritage of these Airmen will forever remain a symbol of freedom and bravery long into the future.