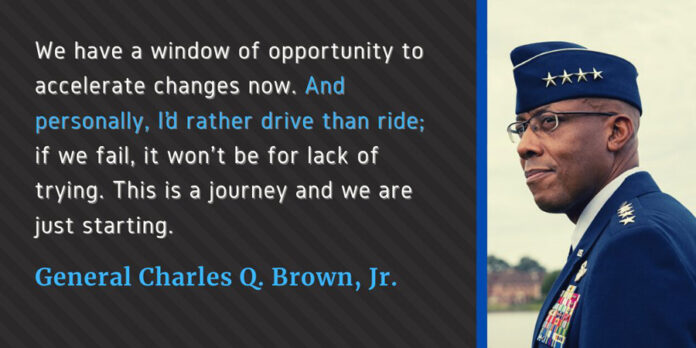 In his first major pronouncement as Air Force Chief of Staff, Gen. Charles Q. Brown, Jr., declared Aug. 31, 2020, that the service must go fast, must collaborate more effectively with Congress and military, industry and allied partners, and “must accelerate the transition from the force we have to the force required for a future high-end fight.”

“We can’t predict the future, but we can definitely shape the future,” Brown said during a media roundtable in which he presented the eight-page strategic approach entitled, “Accelerate Change or Lose.”

“So I think we have a window of opportunity to accelerate some of those changes. And personally, I’d rather drive than ride. I’d rather try to help shape what’s going on versus sitting back observing and being impacted by what’s going on,” he said.

According to Brown, “the document itself is really about why we need to change and foreshadow some aspects of the ‘what’ and the ‘how.’”

“We must rise to the occasion,” he added.

The directive is a mixture of Brown’s expectations for what is required to ensure air superiority and for the Air Force to fulfill its mission to defend the United States and its interests. Though only eight pages, the document spans a range of critical topics that touch on doctrine, Air Force culture, and the changing threats and adversaries the nation confronts.

“Our Air Force must accelerate change to control and exploit the air domain to the standard the nation expects and requires from us. If we don’t change ñ if we fail to adapt ñ we risk losing the certainty with which we have defended our national interests for decades,” Brown warns in the document.

“Only through collaboration within and throughout will we succeed. The Air Force must work differently with other Department of Defense stakeholders, Congress and both traditional and emerging industry partners to streamline processes and incentivize intelligent risk-taking. Most importantly, we must empower our incredible Airmen to solve any problem. We must place value in multi-capable and adaptable team builders, and courageous problem solvers that demonstrate value in diversity of thought, ingenuity and initiative.”

In explaining why the steps must be taken, Brown is blunt about the stakes and about the risks as well as the realities of a new strategic environment defined primarily by threats from “peer competitors” such as China and Russia.

The document drives home the point with a sub-headline declaring, “Good Enough Today Will Fail Tomorrow.” That sub-headline follows one in the previous section stating, “Uncontested U.S. Air Force Dominance Is Not Assured.”

“Tomorrow’s Airmen are more likely to fight in highly contested environments, and must be prepared to fight through combat attrition rates and risks to the nation that are more akin to the World War II era than the uncontested environment to which we have since become accustomed,” Brown says in the document. “The forces and operational concepts we need must be different. Our approach to deterrence must adapt to the changes in the security environment.”

When asked about the stark language relating to potential attrition, Brown was direct.

“If we ignore the problem and don’t talk about what’s at risk and the potential for high attrition rates and we just continue on the path we’re on, then shame on us,” he said.

“One of my jobs as Chief of Staff of the Air Force is to provide Ö my best military advice. As I provide that advice as we go forward, I’ll also articulate the risk Ö I think I owe it to the Air Force, to our senior leadership, a discussion on what the potential is. When you talk about a peer competitor at a high-end fight that is one of the facts that we have to be thinking about. We can’t just wish that part away,” he said.

At the same time, many of the actions and the emerging culture Brown outlines in his strategic approach have been underway, driven in part by the demands of the 2018 National Defense Strategy.

Foremost among them, is the continued push to fully integrated joint warfighting.

“We must focus on the joint warfighting concept, enabled by Joint All-Domain Command and Control and rapidly move forward with digital, low cost, high tech, warfighting capacities,” the document states.

The document puts Brown‘s personal stamp on the process for ensuring the Air Force continues to successfully transform itself to not only confront peer powers but to adopt a command and control structure that includes air, land, sea, cyber and space as well as seamless connections with other services and allies.

Brown’s strategic approach embraces a cultural shift that “requires greater integration across the services to deny competitors an exploitable seam between the high-ground domains and the cyberspace that connects and enables effects across them all. As Airmen, we must think differently about what it means to fly, fight and win.”

The strategy calls on Airmen to be “multi-capable and adaptable team builders, as well as innovative and courageous problem-solvers, and demonstrate value in the diversity of thought, ingenuity and initiative.”

The desire for innovation and problem solving, Brown’s document says, must take place as leaders continue pushing “to streamline bureaucracy to the greatest extent possible.”

At the same time, Brown’s strategic approach demands both accountability and introspection. “We must candidly assess ourselves and address our own internal impediments to change,” the document says.

It adds, “We must design our capabilities and concepts to defeat our adversaries, exploit their vulnerabilities and play to our strengths. And we must be able to frame decisions and trade-offs with both a near and long-term view of what value our capabilities provide throughout the lifecycle of performance.”

More is needed, he says, and complacency or a reduction of effort and focus cannot occur.

“While we have made progress, our Airmen need us to integrate and accelerate the changes necessary to explore new operational concepts and bring more rapidly the capabilities that will help them in the future fights,” the document says.

All of this change, Brown says, is likely to occur at a time of tightening budgets. That demands “ruthless prioritization” of programs and actions.

“Likely future budget pressures will require the most difficult force structure decisions in generations. We cannot shy away from these decisions,” the document says.

The changing nature of national security, Air Force operations and changing budgets, demands that, “we must candidly assess ourselves and address our own internal impediments to change,” Brown asserts in the strategic approach.

“In doing so, we must acknowledge the realities of the fiscal environment to ensure that the U.S. Air Force is gaining the most value and being good stewards of taxpayer dollars. To be successful, the U.S. Air Force must continue its future design work and accelerate the evolution and application of its operational concepts and force structure to optimize its contribution to Joint All Domain Operations.”

While he describes a challenging future, Brown closes with a note of optimism based in history.

“We have done this before, and together we can do it again,” Brown says in the document.

“Today’s U.S. Air Force, and its assumed dominance, was shaped by highly innovative and courageous Airmen throughout our storied history,” the Strategic Approach says. “Seeing the need for change, they forged new technologically-advanced force structures and developed novel operational concepts that paved the way for the many successes we have achieved. We can do it again.”