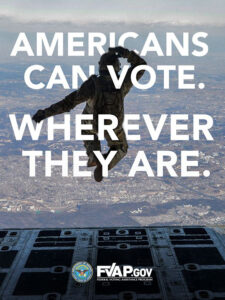 In the 2020 DOD Public Affairs Guidance for Political Campaigns and Elections memorandum of Feb. 11, DOD spokesman Jonathan Rath Hoffman summarized the rules that apply to all DOD personnel regarding involvement in political events.

“The Department of Defense has a longstanding and well-defined policy regarding political campaigns and elections to avoid the perception of DOD sponsorship, approval or endorsement of any political candidate, campaign or cause,” Hoffman wrote.

“The department encourages and actively supports its personnel in their civic obligation to vote, but makes clear members of the armed forces on active duty should not engage in partisan political activities,” his memo read.

The DOD’s Federal Voting Assistance Program was created to ensure that Service members and their eligible family are aware of their right to vote and have the tools and resources to successfully do so ó from anywhere in the world.

As the secretary said in his ethics video, both active-duty service members and civilian employees must understand federal rules and DOD policies pertaining to political activities. Service members and employees should direct any questions to their supervisors or their supporting legal office, said a senior official in DOD’s Standards of Conduct Office.

Service members can register and request an absentee ballot at FVAP.gov. 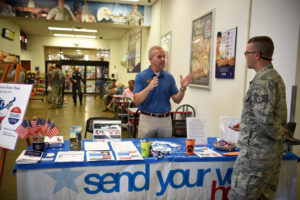 “Maintaining the hard-earned trust and confidence of the American people requires us to avoid any action that could imply endorsement of a political party, political candidate or campaign by any element of the department,” he said.

“As the secretary has stated, we must continuously train and prepare so that we are ready to do what is right when ethical dilemmas arise,” said Scott Thompson, director of DOD’s Standards of Conduct Office. “Training is not a one-time event. The secretary expects department leaders to be personally involved in training their organizations, and to talk about examples of ethical decision-making, good and bad. In addition to annual ethics training, leaders should routinely make conversations about ethics a natural part of meetings and engagements with personnel.”

As leaders, teammates and colleagues, all must inspire one another by setting the right example of ethical conduct, Thompson emphasized.

“Shortly after taking office, Secretary Esper reminded DOD personnel that each of us takes a solemn oath to support and defend the Constitution. The department’s mission imparts a special responsibility on each of us to serve with the utmost integrity and be vigilant in protecting the duties and confidences with which we have been entrusted,” he added. “To ensure we are ready to do what is right when ethical dilemmas arise, we must train and prepare ourselves.”