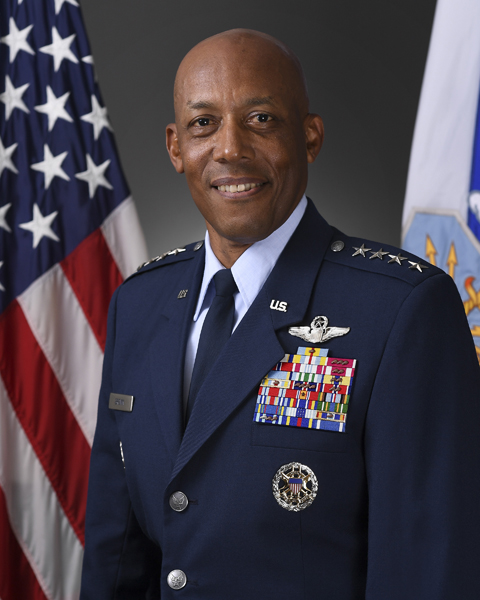 Air Force Chief of Staff Gen. Charles Q. Brown, Jr., said Oct. 21, 2020, that the service must “fully understand our adversary,” it must successfully adapt to information-age warfare while moving with speed and certainty in order to fulfill missions and protect national security.

In his first appearance at the influential Mitchell Institute for Aerospace Studies since becoming the Air Force’s highest ranking officer, Brown offered his prescription during the virtual event for maintaining the service’s excellence, his approach on leadership and insights on an array of topics ranging from the status of the nuclear triad to the value of war games and bureaucracy.

Tying them together was Brown’s insistence that the Air Force move fast and that its policies and practices conform to a time of great power competition and the value of joint operations.

“Our peer competitors … are challenging us in different ways and challenging how we are able to generate combat power now and into the future,” he said, adding that how the threats are defined must also be recalibrated.

“We’re in contested space right now when you think about cyber,” he said. “We need to be thinking about how we deal in the homeland as well at the same time we think about how we might fight what I call an ‘away game.’”

Brown spoke at length during the hour-long session about a document he released in August entitled “Accelerate Change or Lose,” an eight-page document capturing his priorities and the culture needed to accomplish them. That document was followed by “action orders” focused on four specific areas — Airmen, bureaucracy, competition, and finally, design and implementation.

For the “Airmen” category, “I’m thinking about those who wear the uniform or are Department of the Air Force civilians, they ought to appreciate coming to work each day,” echoing a sentiment expressed by previous Chiefs of Staff. “We must provide them the resources, the training and the guidance and the intent and the authority to do their jobs and enjoy coming to work.”

But in a departure, Brown also said a different culture is needed to adapt to a world where speed is necessary.

“We can’t always wait and ask for permission. I want our younger leaders to be empowered to make decisions on a lower level that we trust them to do their job at the same time they trust the leadership; it goes both ways,” he said.

For that approach to work, he said, Air Force leaders must ensure the proper conditions are present. “Do they have all the tools? Have we helped them through the path? Or do we throw them in the deep end and say, ‘Call if you need help?’ How do we work with all the leadership chains to make sure they have what they need?” he said.

Likewise, Brown said he is determined to ensure that leaders and Airmen know bureaucracy must be streamlined and even reshaped. “Redundancy” must be eliminated where possible and lines of communication “must be flattened,” he said.

“I hate bureaucracy. It’s just something I’ve always dealt with. I like cutting to the chase and getting things done,” he said. “… But I also think there are things internal to the United States Air Force that we can do things a bit faster. I’m looking at ourselves in the mirror as a United States Air Force; I think there are things internal to us that we’ve got to do a bit better.”

On competition, Brown said the Air Force, like the U.S. military as a whole, is moving with dispatch to reconfigure its policies, practices and doctrine to confront peer powers such as Russia and China after decades focusing on combatting terrorism.

Succeeding, he said, demands a deep and precise knowledge of each adversary and successfully incorporating new mindsets that embrace joint operations and the value of “capabilities” rather than individual “platforms.”

“We’ve got to get our house in order to talk more about capabilities and less about platform,” he said.

“We need to take a hard look at each platform, each capability we buy and look at it through the lens of what the threat is and not just blindly continuing to buy the same thing because it’s available,” he said.

Brown offered two examples. One is further development and field tests of the advancement of the Advanced Battle Management System. That system links sensors, weapons and hardware from multiple services that provides unprecedented speed and information to joint commanders processed by artificial intelligence and machine learning.

To date there have been three field tests of the evolving ABMS system, with two occurring in recent weeks. “Demonstrations are important because you can see what’s in the realm of the possible rather than just talking about it,” Brown said.

Second, Brown said in response to a question, is clarity on what the Air Force means when it says it needs to increase to 386 squadrons.

“The number 386 was in response to a specific question – how big does the Air Force need to be to execute the National Defense Strategy?” Brown said. “It wasn’t how big of an Air Force can you afford?

“I think more so what’s the capability that would give me the equivalent of 386? It may be information, moving data that increases our capability. Anything less, capability-wise, incurs some level of risk,” he said.

Brown acknowledged that modernizing the land-based and bomber-based nuclear deterrent that the Air Force operates is needed. That the air, land, sea triad is critical to the nation’s security is without question, Brown said, calling it “a bedrock of deterrence since the Cold War.”

“As we think about the modernization aspect of this we also have to understand where our adversaries are and what they are doing. That should factor into the decision making as we go forward.

“We’ve got great systems but our two legs of the nuclear triad are up in age and modernization will be important,” Brown said.