Recruits and officer candidates memorize this and many other pieces of knowledge like the first female Marine, first Marine aviator, and dozens of other historical figures and events. However, for our Black brothers and sisters, the history seems muddled.

Of course, the record speaks of the Montford Point Marines, created after President Franklin D. Roosevelt’s executive order to prohibit racial discrimination in the defense industry. However, specific events, dates, and names elude the memory of many Marines. After all, Marine Corps curriculum only added the history of Montford Point in 2011.

A timeline created by the U.S. Marine Corps Museum provides the true record. The first Black Marine enlisted almost 170 years before Montford Point, during the Revolutionary War. Capt. Miles Pennington recruited Private John “Keto” Martin in April of 1776. The person who enslaved Martin had no idea of his recruitment to the Continental Marines.

Martin served aboard the Continental brig USS Reprisal, participating in a cruise that resulted in the capture of five British merchantmen. He served on the Reprisal until 1777, when the dictionary of American Naval Fighting Ships notes that the brig was caught in a storm, destroying it and killing all those aboard but the cook.

Isaac Walker and a man known only as “Orange” followed Martin, enlisting at Tun Tavern in 1776. Capt. Robert Mullan inducted them into his company, which was part of a battalion of Marines raised by Maj. Samuel Nicholas. Mullan’s company crossed the Delaware River with George Washington and fought the British at the Battle of Princeton in 1777, cementing Walker and Orange’s significant role in Marine Corps history.

According to the U.S. Marine Corps Museum, at least 13 of the 2,000 Continental Marines were Black.

In 1796, Secretary of War James McHenry passed an act that banned people of color from serving in the military. This act remained law until the Emancipation Proclamation in 1863 allowed people of color to serve in the Army and Navy, but not the Marines.

President Franklin D. Roosevelt enacted Executive Order 8802 in 1941, declaring “There shall be no discrimination in the employment of workers in defense industries and in Government, because of race, creed, color, or national origin.” In 1942, the Marines established Montford Point as the training ground for the first Black Marine recruits.

Alfred Masters was the first Marine to swear in after the order, raising his right hand one minute after midnight on June 1, 1942, according to his wife’s obituary. Isabell Masters, Alfred’s wife, would later run for President of the United States five times, the most of any woman in history.

Howard P. Perry soon joined Masters, later becoming the first Black recruit by arriving at Montford Point on Aug. 26, 1942. Perry and the recruits who followed him formed into the 51st Composite Defense Battalion.

On March 14, 1943, eight Montford Point Marines earned the title of drill sergeant. While these drill sergeants were permitted to lead all-Black platoons, Gen. Thomas Holcomb, 17th commandant of the Marine Corps, limited the rights given to enlisted leaders. He decreed that no Black noncommissioned officer would outrank a white man in the same unit.

The 52nd Defense Battalion was formed as a sister unit to the 51st after an influx of recruits at Montford Point during World War II.

Black Marines first saw combat with the Ammunition and Depot Companies in the battles of Saipan, Guam, and Peleliu from 1943-1945. Pvt. Kenneth Tibbs was the first Montford Point Marine to give his life in combat on June 15, 1944. By war’s end, 87 Montford Point Marines were killed in action, according to the U.S. Marine Corps Museum.

Only 1,500 Montford Point Marines remained on active duty after the war. The remainder of the 20,000 Marines trained at Montford Point received discharge orders. 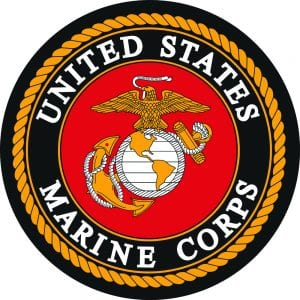 On Nov. 10, 1945, Frederick C. Branch made history as the first Black commissioned officer in the Marine Corps Reserve. He is still honored today with a scholarship in his name, awarded to individuals who are attending or are planning to attend historically Black colleges or universities.

In 1948, John Rudder, a prior-enlisted man, was commissioned as the first Black active-duty commissioned officer. That same year, President Harry Truman issued Executive Order 9981, establishing equality of treatment and opportunity in the military regardless of race.

According to the Marine Corps History Division, Montford Point was renamed to Camp Gilbert H. Johnson in April 1974 in honor of Sgt. Maj. Gilbert Johnson, one of the first Black Marines and an alumnus of Montford Point. Johnson had served for six years in the Army and eight years in the Navy. Upon the issue of Executive Order 8802, Johnson transferred to the Marine Corps, serving for 17 years.

Johnson was one of only two Black sergeants major to serve in World War II. The other was Sgt. Maj. Edgar Huff, who was Johnson’s brother-in-law. Camp Johnson was the first military installation named after a Black man.

Marine Corps curriculum adapted to include the struggles, stories, and history of Montford Point Marines in 2011. The following year, the Montford Point Marines received a collective Congressional Gold Medal, adorned with images of the Marines and the phrase “For outstanding perseverance and courage that inspired social change in the Marine Corps.”

In April 2020, Gen. David Berger, 38th commandant of the Marine Corps, banned the display of confederate flags on all Marine Corps installations. “Only as a unified force, free from discrimination, racial inequality, and prejudice can we fully demonstrate our core values,” Berger wrote in a public statement.