This year, the Martin Luther King Jr. Day of Service is recognized today, Jan. 17, 2022. The national recurring theme of this holiday is “Remember! Celebrate! Act! A Day On, Not A Day Off.” It calls upon the American people to engage in public service and promote peaceful social change.

Dr. King’s unfinished movement toward equality can be achieved by our united, enduring efforts. King’s legacy has inspired activists fighting injustice in various parts of the world. Our nation strives to keep his dream alive for future generations.

Dr. King once said “There is nothing greater in all the world than freedom”.

Dr. Martin Luther King, Jr., born with the original name Michael King, Jr., was Baptist minister and social activist who led the civil rights movement in the United States from the mid-1950s until his death by assassination in 1968. His leadership was fundamental to that movement’s success in ending the legal segregation of African Americans in the South and other parts of the United States.

King came from a comfortable middle-class family steeped in the tradition of the Southern Black ministry; both his father and maternal grandfather were Baptist preachers. His parents were college-educated, and King’s father had succeeded his father-in-law as pastor of the prestigious Ebenezer Baptist Church in Atlanta. The family lived on Auburn Avenue, otherwise known as “Sweet Auburn,” the bustling “Black Wall Street,” home to some of the country’s largest and most prosperous Black businesses and Black churches in the years before the civil rights movement. Dr. King received a solid education and grew up in a loving extended family.

Dr. King skipped several grades in elementary school and entered Booker T. Washington High School in 1942 at the age of 13. At 15, he graduated high school and enrolled in Morehouse College, where he learned of the advantages of the ministry in the fight against social injustice and decided to become a pastor. Just two years later, Dr. King was ordained as the assistant pastor of Ebenezer Baptist Church. 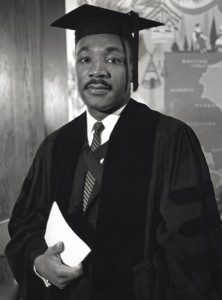 King rose to national prominence as head of the Southern Christian Leadership Conference, which promoted nonviolent tactics, such as the Bus Boycott, Voting Rights and the most famous March on Washington to achieve civil rights. Dr. King along with more than 200,000 people marched towards Washington for human rights. Also, it’s the largest human rights campaign in U.S. history. During the protest, he gave a speech titled “I Have a Dream” which was one of the most renowned speeches.

Martin Luther King Jr. was only 35 years old when he was awarded the Nobel Peace Prize in 1964. He called this honor “the most significant international endorsement possible of the civil rights struggle.” The prize money that came with the award was distributed among several major civil rights organizations upon Dr. King’s request.

“Our lives begin to end the day we become silent about things that matter.”

For more information, please visit https://www.defenseculture.mil/Human-Relations-Toolkit/Special-Observances/, or contact the EO office at 355FW.EO@us.af.mil.