On hand for the change of command ceremony were Gen. Mark Kelly, commander of Air Combat Command, and Gen. Laura Richardson, commander of U.S. Southern Command. 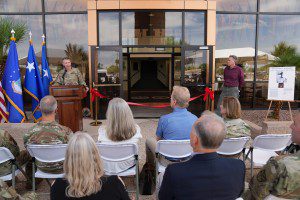 Prior to this assignment, Pettus was the vice commander, U.S. Air Force Warfare Center, Nellis Air Force Base, Nev., where he was responsible for coordinating operational testing and tactics development programs, and advanced training schools, exercises and venues in developing innovative leaders and Airmen with proven and tested technology, the most current tactics, academic training and opportunities to practice integrated force employment.

Pettus earned his commission from the U.S. Air Force Academy in 1994. He graduated from Euro-NATO Joint Jet Pilot Training at Sheppard AFB, Texas, and was first stationed at Royal Air Force Lakenheath, United Kingdom, as an F-15E pilot. He is a graduate of the U.S. Air Force Weapons School and is a command pilot with more than 2,700 hours. He has flown combat missions in operations Northern Watch, Southern Watch, Allied Force, Enduring Freedom, Iraqi Freedom and Inherent Resolve.

In this role, he advises the commander on mission effectiveness, combat readiness, and professional development. As Command Chief of the Air Force component to U.S. Southern Command, he supports security cooperation and the provision of air, space, and cyberspace capabilities in Latin America and the Caribbean. Air Forces Southern supports U.S. Southern Command to deter aggression, defeat threats, respond to crisesí, and works with allies and partner nations to build regional capacity for a secure, free, and prosperous Western Hemisphere.

Fuselier enlisted in the Air Force in February 1996 and his background includes various duties in the aircraft armament career field. He served as a Professional Military Education instructor and has held various positions while serving at squadron, group, wing, major command and combatant command levels. He has deployed in support of Operations Southern Watch, Inherent Resolve, and Theater Security Package. He has completed overseas tours in the Republic of Korea, Italy, Alaska, Hawaii, and Southwest Asia.

Prior to assuming his current position, he served as the Superintendent of United States Central Command, Macdill Air Force Base, Fla.

As part of the days’ activities, Kelly, Richardson, Pettus and other members of AFSOUTH gathered to rededicate the 12th Air Force building at Davis-Monthan AFB,.

The building is named in honor of 1st Lt. Raymond Knight, a Medal of Honor recipient and U.S. Army Air Forces P-47 Thunderbolt pilot who flew 82 combat missions over four months of flying in Italy in World War II, also earning the Distinguished Flying Cross and six Air Medals, destroying 14 grounded enemy aircraft before being hit by ground fire and dying in a crash while returning to base.