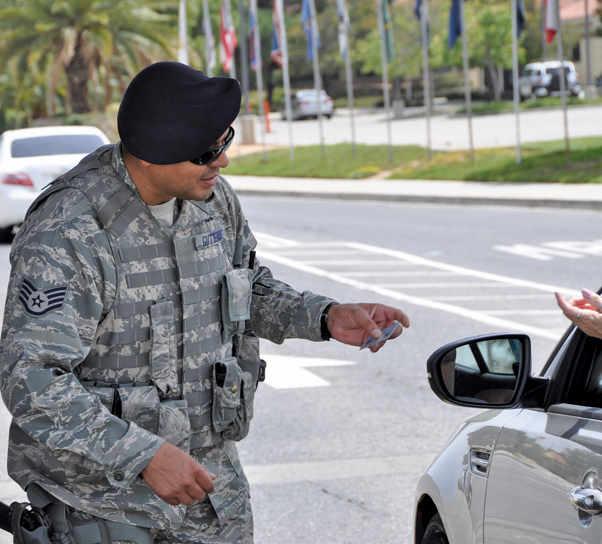 Staff Sgt Alfonso Gutierrez, installation patrolman, 452nd Security Forces Squadron, March Air Reserve Base, checks an ID card at the March main gate May 13, 2015. Gutierrez’s squadron was named the best SFS in the command for 2014 and has stepped up security since last week due to an increase in the threat level.

The competition for the award was strong, but the March defenders had enough accomplishments last year to fill an entire Beacon issue and then some.

“Our squadron members have a lot on their plates, but they are professionals who do their jobs with excellence and integrity, always putting service before self,” said Maj. Ryan Robin, 452 SFS commander. “They take pride in their mission and it shows.”

The team was responsible for several high-visibility details, including Presidential support missions, support to U.S. Speaker John Boehner, and Chief Master Sgt of the Air Force James A. Cody’s visit to the base.

With all the professionalism they display, their work often goes unnoticed.

Did you know they were responsible for identifying a person who had been barred from the base and notifying local authorities who subsequently arrested the suspect, preventing a possible shooting? They also blocked and detained pilots who were unauthorized to land at March Field, averting a possible threat to vital Air Force resources.

“We are pretty quiet about the service we provide,” said Robin. “March defenders live and breathe the Air Force Core Values and don’t expect anything in return.”

Providing a safe and secure environment here is only part of their mission. Many have traveled elsewhere to protect and serve.

Eighty nine March defenders deployed and forward deployed to four different locations throughout 2014.  During those deployments they secured more than $18.6 billion in assets, protected nearly 12,000 personnel, supported more than 10,000 sorties and at one location, they established force protection from the ground up.

Squadron members also hosted visiting security forces from Joint Base San Antonio here to provide the visitors with training in four vital areas—active shooter, flight experience, anti-terrorism and weapons qualification, as well as hosting a German officer as part of an exchange program.

In addition to helping fellow Airmen, the March defenders contribute their time and resources to local communities.

Although many of the squadron’s members garnered individual awards and accomplishments, it is the outstanding teamwork that contributed to this award.

“The men and women who make up this squadron work hard to protect and serve and they humbly have earned this recognition,” Robin said. “We understand that if it were not for the support of March’s employees and the local community, we would not have received this award.”