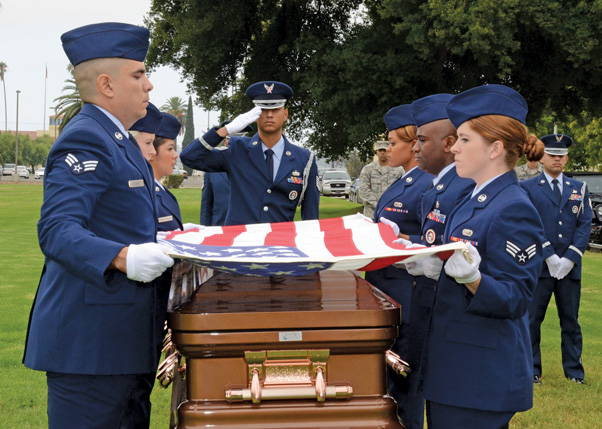 “They have accomplished something that many people cannot do,” said Willingham. “And today each one of our young champions that are graduating will be reminded of the light (honor, precision, attitude, and discipline) that was placed inside of them the day that they walked on.”

Class HG-1’s flawless performance is a reflection of the Honor Guard’s primary mission toward honoring those who have served our nation.

“What I saw out there was unbelievable precision among the group,” said Maj. Alan Tornay, deputy commander, 452nd Mission Support Group. “What the Honor Guard does on a daily basis to represent March (ARB) is truly outstanding.”

Every movement, notable in their performance, was perfected individually and as a team.

“This is a direct result of their hard work, commitment to excellence, and a strong desire to serve and honor our Air Force heroes,” said Hicks.

Becoming an Honor Guard member is more than just the precise drill movements and immaculate uniform appearance. It’s about being entrusted to uphold the standards of all Airmen and be the epitome of perfection, Hicks said.

The ceremonial guardsmen is an individual of good reputation, having integrity, ethical conduct and exhibiting standards which merit respect; responsible for protecting and overseeing the maintenance of standards on and off duty, Tornay said.

The team’s primary mission is to provide military funeral honors for active duty, retiree and veteran members who served honorably in the United States Air Force and Army Air Corp. The secondary mission is to perform military changes of command, retirements, retreats and other special functions.

Their area of responsibility extends from the Ventura County border to the Arizona and Mexico borders, and from the Pacific Ocean to the Nevada border, covering nearly 50,000 square miles.

“This is not something you just put on a uniform Monday through Friday to do,” Tornay said when he addressed the class. “This is a 24/7 job and I thank you (HG-1) and your family for your level of commitment.”

“It is truly an occupation which requires outstanding devotion and commitment to duty,” said Tornay. “By maintaining our history and exceptionally high standards, Honor Guards will continue to remain an icon of excellence.”