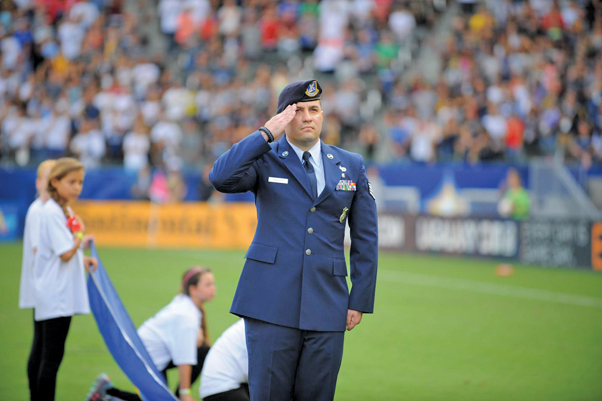 Staff Sergeant Pablo Castillo, 452nd Security Forces Squadron, was invited to be honored at the October 18, 2015, L.A. Galaxy game as part of the organizations Hero of the Game program.  He was introduced as a member of the March Air Reserve Base defenders whose duties as an installation patrolman include resource protection of aircraft and other Defense Department assets as well as law enforcement of base personnel. Castillo has served a total of 14 years. Prior to becoming a patrolman, he was an Air Force Dental Technician. He has served also served at bases in New Mexico and Korea. Proud of his Air Force Achievement Medal for duties performed on a Humanitarian mission to Bolivia, Castillo found his calling protecting personnel and property when his direct efforts led to an Outstanding Unit award where he was an integral part in security infrastructure for the medical group while stationed at Kunsan Air Base, South Korea.