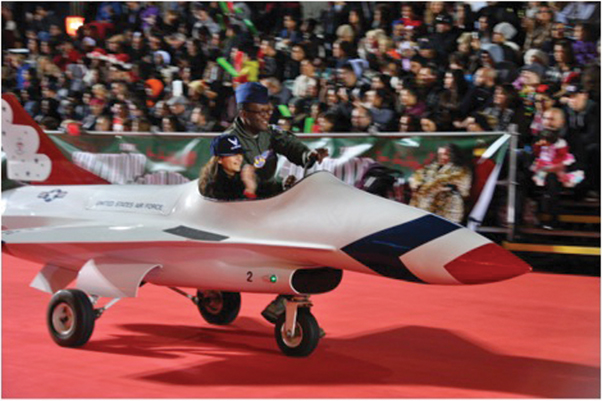 Senior Airman Astin Coleman, ceremonial guardsman, March Field Blue Eagles Total Force Honor Guard, whiz’s down the red carpet, alongside a young pilot, in a mini F-16 aircraft, from the Air Force Sergeant’s Mini Jet Team, during the 84th Annual Hollywood Christmas Parade, in Los Angeles, Nov. 29. The Honor Guard has been participating in the parade since 2009. Participation this year, by members from March Air Reserve Base and Edwards Air Force Base, included walking in the parade, assisting young drivers pilot the mini jets, and providing a color guard. The color guard led the way, followed by Navy reservists from the Navy Operational Support Center, Los Angeles, and the mini-jets followed. Other Air Force reservists from March ARB also marched in the parade alongside active duty members from Los Angeles AFB holding up a huge toy soldier balloon. The parade next airs Dec. 20th at 4 p.m. on KTLA 5, Dec. 21st at 4 p.m. on the Hallmark Channel and Dec. 23rd at 3 p.m. on Hallmark Movies & Mysteries.