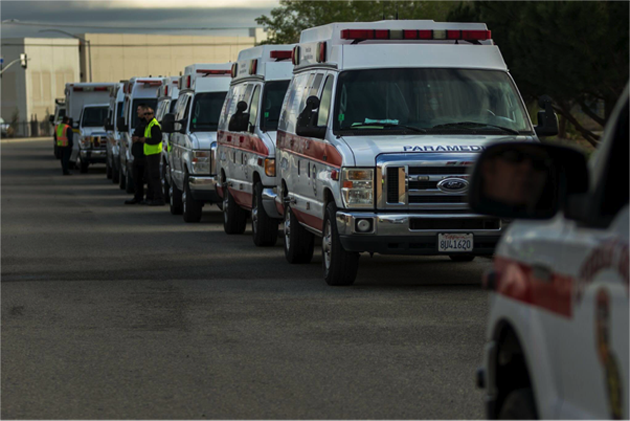 March members tested their first responder capabilities February 18, during a Major Accident Response Exercise (MARE) in preparation for the upcoming March Field AirFest, April 16 and 17. Participants practiced their responses to a simulated aircraft crash to ensure they are ready to quickly react should the real thing occur.

Practicing for numerous emergency situations allows response agencies the opportunity to test readiness, evaluate emergency procedures, alleviate possible issues and, in the rare event something does occur, to save lives. The installation’s emergency responders worked alongside partnering agencies from around the community, a critical relationship throughout a disaster, to ensure unified operations.

The MARE was a great opportunity to assess how the installation’s emergency responders and local area responders would work together in a mass casualty event.  The response teams included various agencies, such as fire, medical and law enforcement from numerous organizations and jurisdictions within the region. Some of these agencies will be staged on base during the air show in order to achieve maximum preparedness and response in coordination with March emergency response organizations.

With hundreds of thousands of spectators anticipated to attend the air show, exercises like these are specifically intended to test the base’s response to a disaster. The leading focus is to safely respond and mitigate the emergency. It is extremely important to run exercises like this recent MARE to provide the opportunity to see how each agency works, confirming operations go smoothly, which makes a difference on how each entity responds to a real-life accident or incident.

While there are many players in making sure the air show is a success, knowing that the first responder teams are prepared to answer the call makes March that much more safe and enjoyable for all involved.