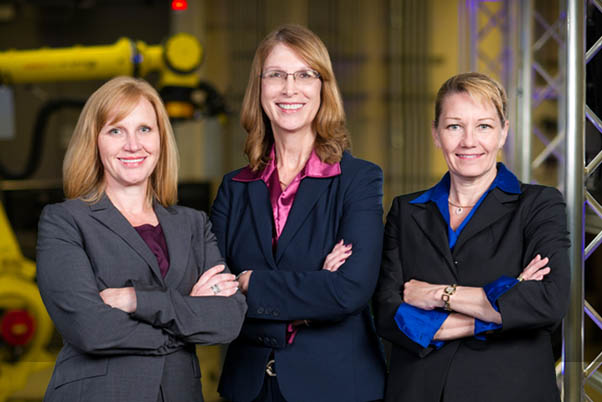 At Raytheon, women lead development and production of some of the most advanced weapon systems in the world. That’s a real rarity, considering the gender imbalance in the science and engineering fields. Some 87 percent of all engineers in the United States are men, according to the American Society for Engineering Education.

Laura McGill, for example, is vice president of engineering at Raytheon’s Missile Systems business in Tucson, Arizona, where she directs more than 5,000 engineering professionals.

“Technical leadership can be asserted by whoever has the right knowledge, skills and experience to guide a team to successful outcomes,” McGill said.

McGill is playing a role in the future of the profession. She mentors many engineers as an instructor for the systems engineering technical development program.

Another leader is Kim Ernzen, vice president of operations at the Missile Systems business, where she runs manufacturing. She is responsible for product manufacturing, facilities, and environmental, health and safety functions. Operations has more than 4,000 employees in seven states, handling assembly and weapons system integration for the nearly $6 billion business.

“Diversity truly fuels our company,” Ernzen said. “Anything is possible for women in their careers if they challenge themselves.”

Raytheon Missile Systems was recently honored with “Manufacturer of the Year” for the innovative processes at its missile integration facility in Huntsville, Alabama. The Arizona Manufacturing Council also honored the business with its Pioneering innovation award for 2015.

Cheryl Whitis plays an important leadership role in the company’s missile systems business. As chief information officer and vice president of Information Technology, Whitis oversees a complex IT environment with more than 12,000 employees and multiple locations around the world.

Whitis has led initiatives that resulted in significant cost savings, improved performance and better integration of acquisitions. She was named one of Computerworld’s Premier 100 IT leaders in 2010.

Whitis has a message for women who believe they must conform to a certain image to be part of upper management. “Stay true to yourself,” she said, “and make sure you love the work you do.”

Former loadmaster, tester to be inducted into hall of fame