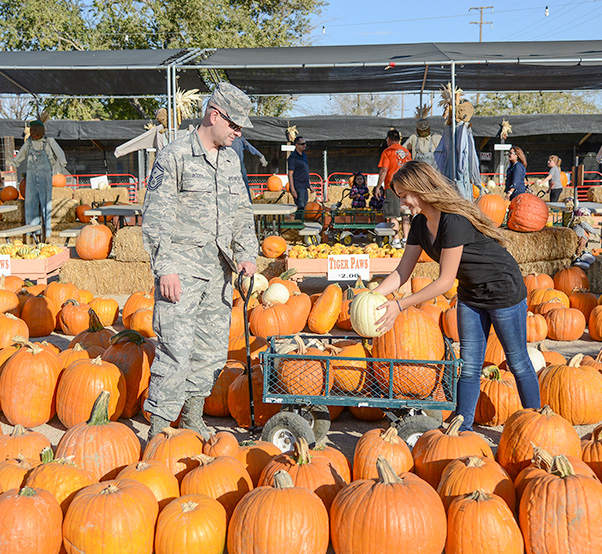 ROSAMOND, Calif.–Each year when October rolls around, pumpkin season begins. There are pumpkins for carving and decorating, pumpkin-spiced drinks, pumpkin pies and much more. According to the United States Department of Agriculture, 192.2 million pounds of pumpkins were produced in California in 2014.

This year, Tapia’s Pumpkin Patch on Rosamond Blvd. donated around 65 of their locally grown pumpkins to the 412th Security Forces Squadron children’s Halloween party. Three families of the 412th SFS came to the pumpkin patch Oct. 28 to pick pumpkins for the party.

The party will be held Oct. 30 at the Chapel 1 Annex, which is hosted by the squadron’s key spouses primarily for families of deployed members, but is open to anyone in the squadron.

There will be crafts, games, food and even a pumpkin patch created with the donated pumpkins.

“[Using hay bales] we block off a section in the courtyard and then put all the pumpkins in and the kids can go in and get all the pumpkins out,” said Ashley Harris, 412th SFS key spouse. “It is a lot of pumpkins; it’s kind of overwhelming how nice it is.” 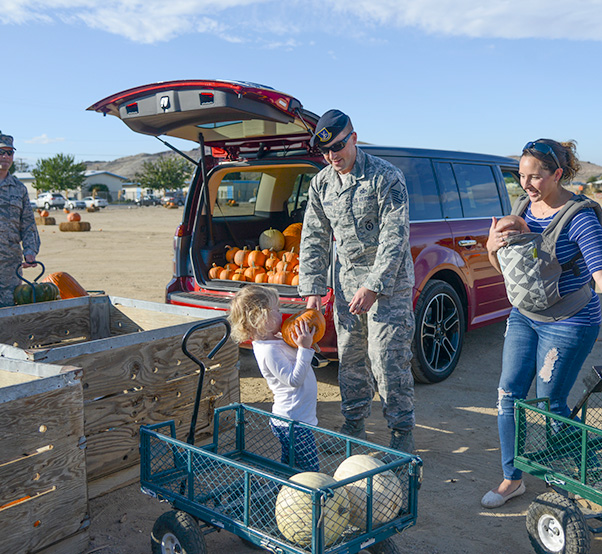 Master Sgt. Scott Harris, 412th Security Forces Squadron, loaded pumpkins into their vehicle at Tapia’s Pumpkin Patch with the help of his daughter, Ava, for the squadron’s Halloween party.

Last Thursday, Tapia’s Pumpkin Patch hosted the October Hearts Apart activity. More than a dozen children and their parents were given complimentary wristbands for unlimited activities and each child took home a free pumpkin. John Benson and his wife Cindy, the pumpkin patch volunteers who hosted the group, purchased pizza for them.

“It’s just our way of saying thanks to them,” said Benson. “Especially where one of the parents is gone fighting for our freedoms; fighting for us to be having this fun. It’s a small way to thank the families.”

Tapia’s Pumpkin Patch has been in Rosamond for about 20 years, started by owner Charles Tapia and his family.

“It was such a small operation, they actually would hand people flashlights so they could go in and pick out their pumpkin at night,” said Benson about the early days at the pumpkin patch. “Since then we’ve added lighting and grew 10-fold. We have several acres here and we just keep expanding.”

Today, they have bouncy houses, train rides, a petting zoo and a pumpkin launcher. According to Benson, everything but the hay bales is grown locally in Rosamond with 16 different varieties of pumpkins and squash. Every year the volunteers spend three months setting up and stay open for the month of October with their last day on Halloween.

“We do it for the community,” said Benson, adding that the profit they make helps pay for harvesting the pumpkins for the next year. 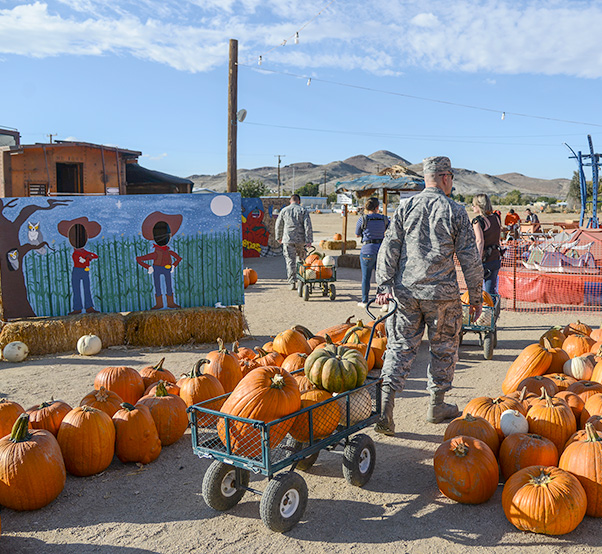 Tapia’s Pumpkin Patch in Rosamond, Calif., donated around 65 pumpkins to the 412th Security Forces Squadron Oct. 28 for their children’s Halloween party to be held Oct. 30 at the Chapel 1 Annex.