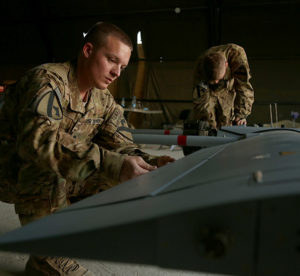 Soldiers with 3rd Squadron, 6th Cavalry Regiment, provide a set of eyes in the sky in the fight against Daesh through the use of Tactical Unmanned Aerial Systems.

Under the Army’s aviation restructure initiative, UAS can be used for attack missions and to supplement manned missions against the enemies of the U.S. and its allies.

“We are deployed in direct support of the fight against Daesh,” said Capt. Jeff Gray, the commander of A Troop, 3-6 Cav. “We escort UH-60 Blackhawks and other fixed wing aircraft during both reconnaissance and attack missions.”

The Army’s aviation restructure initiative uses more unmanned aviation assets to ensure the safety of its soldiers, while multiplying the capabilities of its units.

“These assets are controlled remotely and so using the UAS, it mitigates the risk incurred by our soldiers, because the operators are still in the safety of the base,” said Gray.

Soldiers of 3-6 Cavalry use UAS on a daily basis for their various missions, which affords them a large amount of hands-on training with these systems.

“Our Soldiers go through vigorous training to maintain their skills with this equipment,” said 1st Sgt. Lindsey Franklin, the senior noncommissioned officer for A Troop, 3-6 Cav. “Most units have around 600 hours of flight time, our unit has flown more than 2,500 this year alone as we help in the fight.” 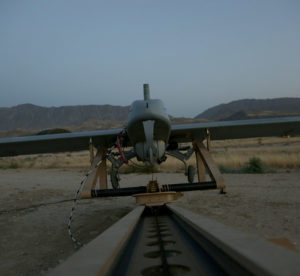 An Unmanned Aerial System is prepared to take off from Combat Outpost Xia Haq, Afghanistan, May 31, 2013. The UAS flies over combat zones while being controlled from the ground.

One U.S. Army Central mission is to partner with host-nation forces to help secure the region from current and future threats and to deter aggression.

“We are here to protect our homeland from future attacks and to help the Iraqi people secure their own country,” said Lt. Gen. Michael X. Garrett, USARCENT commanding general. “As we prioritize our engagements and efforts, and master the basics of our craft, the region and the world will become a place free from hostilities.”

3-6 Cav’s leadership ensures that each of their Soldiers understand how they contribute to the fight and how their actions affect the overall mission.

“Our soldiers are very resilient and know their role on the battlefield,” said Franklin. “With that knowledge, we are able to accomplish our missions with a high level of understanding and drive.”

Garret stated USARCENT and subordinate units will be able to accomplish many great things as they continue to strive to be the best in their trade. He added from deterring enemy actions to training its partners, the mission they do we have lasting impacts.

“What we do is vital to the security of our nation and its international interests,” said Garrett. “Our discipline and attention to detail ensure that we accomplish our mission and make the region a more secure and stable place.”