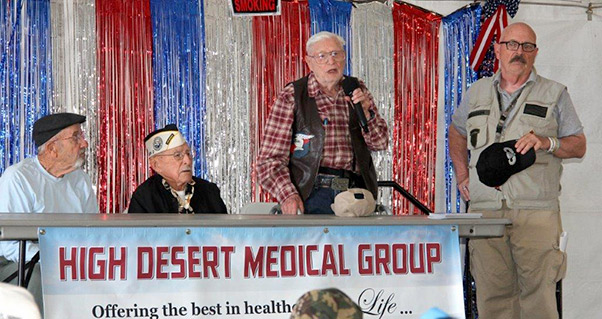 Planes, flames and a great history lesson were all part of the third annual Los Angeles County Air Show, March 19-20 at the Gen. William J. Fox Airfield in Lancaster, Calif., where 137,000 guests came to observe first class performers and learn of the people who fought to keep America free.

Throwing the date back to Dec. 6, 1941, guests were encouraged to dress in 1940s or Hawaiian attire for the event kickoff at the “JetHawk’s Hanger” where U.S. Marine Corps Capt. Skye Martin of Tehachapi, Calif., started the festivities on the 18th by singing the National Anthem.

“Beautiful! That is exactly how it should be sung,” said an announcer. 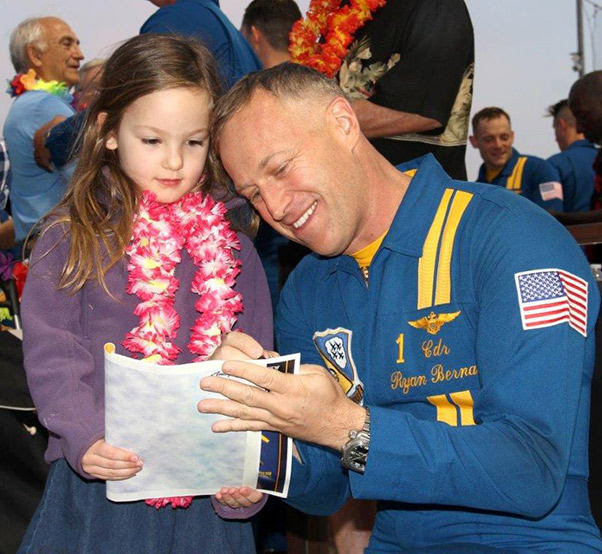 Emma Galloway, 4, from Valencia, Calif., gets an autograph from Blue Angel Pilot 1st Commander, Ryan Bernacchi. Emma saw the Blue Angels two years ago and told her parents she is going to become a pilot.

Martin has also sung for the Pro Bowl in Hawaii and at the Padres Memorial Day game via satellite from Afghanistan.

“She has been singing since she was in diapers,” said her father, Cam Martin. Currently stationed in San Diego, Capt. Martin has a Master’s Degree in environmental science policy and oceanography, and is currently working in public affairs.

Commemorating the 75th anniversary of the Japanese attack on Pearl Harbor that launched the U.S. into World War II, vintage aircraft flew over the stadium before the Blue Angels crew members and students from Edwards Test Pilot School played three innings of softball. 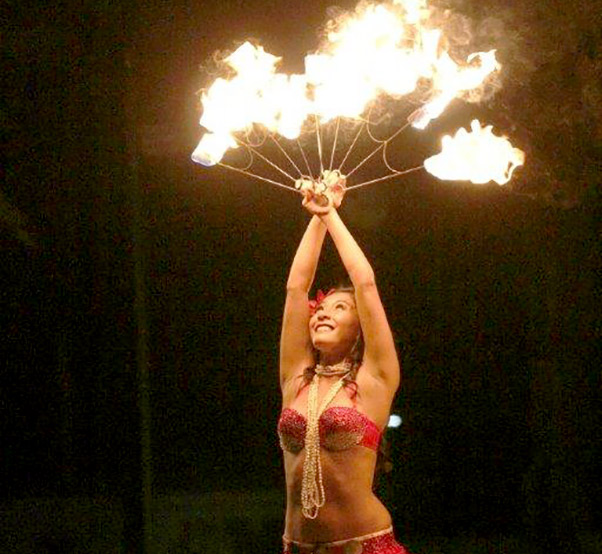 The Dancing Fire Entertainment Company wowed the crowd with beautiful hula dancers and fire breathers at the “JetHawks Hanger” to kick off the Third Annual Los Angeles County Air Show.

Not seeing the Blue Angels’ team moments before game time, “maybe they won’t show up, they probably got scared, we are pretty intimidating you know,” joked Steve Kennedy, a flight test engineer studying at Edwards Test Pilot School.

After crushing the Angels in a quick, entertaining game, The Dancing Fire Entertainment Company wowed the crowd with beautiful hula dancers and fire breathers, while others got autographs from Blue Angel pilots, crew members and airshow performers.

“It was such a wonderful, professional show, I’m sorry more of the public didn’t take advantage of the event,” said Lily Knight who enjoyed the free festivities with her husband, Congressman Steve Knight. R-Calif.

On Saturday, the weather could not have been more perfect.

While many had their eyes fixed to the sky, others learned about science, technology, engineering and math in many STEM tents. Students of all ages got hands on experience flying aircraft simulators, playing Frisbee with a robot and flying jets via video controls and simulators.

“The L.A. County Air Show is an excellent opportunity to inspire children of all ages by the wonder of flight,” said Lisa Brown, director of Educational Outreach for the Flight Test Historical Foundation. “We want to ignite interest and passion for learning on how and why airplanes can fly.” Anyone can take free classes online at the Jr. Test Pilot School site.

“I’ve always wanted to be a pilot, but since I was born blind in one eye, that just wasn’t in the cards,” said Fred Jackson, 78, from San Diego after he flew an F-22 setup. 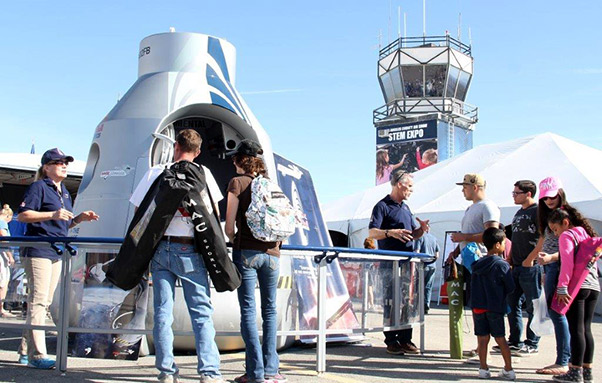 He was elated to get an autograph from Art Thompson, the man behind the Red Bull Stratus, who had the Sage-Cheshire capsule displayed near the front entrance. “I need two days just to play in the tents and get autographs,” laughed Jackson. “These are the people we read about in history books — right here!”

Carina Eriksson and Gunnar Akerberg came from Stockholm, Sweden, to take part in the photo tour hosted by Bob Driver, which quickly sold out.
“I am an amateur so to get the same access and to learn from professional photographers is really fun and a great opportunity for me,” said Eriksson. The couple has visited six aircraft museums since arriving in California and are on their way to shoot the flowers in Death Valley.

Brian Lynch passed up his favorite concert event, “South by Southwest” in Austin, Texas, to participate with the photo tour group and says he will be back next year with friends. 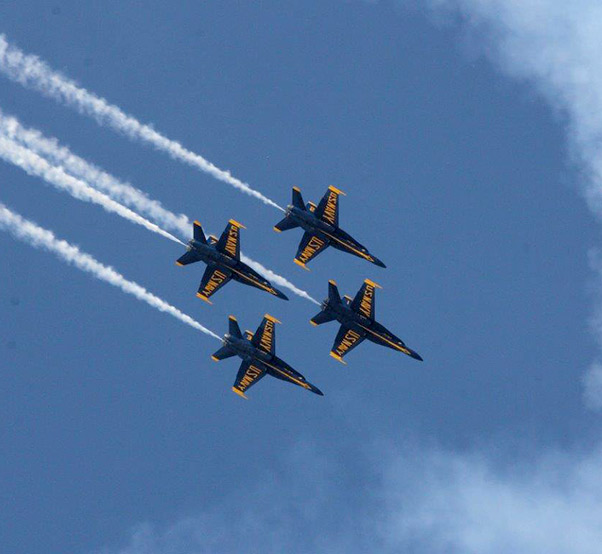 With a Hollywood type pyro show and World War II aircraft dogfighting, the Tora! Tora! Tora! presentation was a touching history lesson of the 2,335 military personnel killed, including 2,008 Navy, 109 Marines, 218 Army and 68 civilians during the Dec. 7, 1941, attack on Pearl Harbor.

High Desert Medical hosted a tent where aerospace personnel and World War II guest speakers shared intimate stories from being the first to fly an experimental, top secret jet to the horrors of using various gasses as a weapon.

“When you have the burden of war, you will carry it for the rest of your life — it will have some barring on every experience you have, and every decision you make …” said Army Veteran, Dennis Anderson, who hosted the veterans. “These men are the tip of the spear. They are the ones that were the front line.”

World War II veterans returning from the war, most in their early twenties, were told to put their experiences on the shelf and not to talk about the horrors they faced. With 75 years of living before them, they came home, went to work and built America.

Charles Lindbergh instructed Bert Torrey on how to fly the P-38.

“It was easy to fly. Lindbergh could get 10 hours of flying time, when the aircraft was made to only be flown for four hours on a full tank,” shared Torrey who served in the 49th Fighter Group.

“In combat you do what you are told to do,” explained Torrey. A few months ago he read about a man who set someone on fire with lighter fluid.
“I used Napalm — when you drop those bombs, it leaves a fire over your target. You may kill a hundred or more people at one time. We don’t need to have that kind of a country. People deliberately burning people to death. I simply want to remind you this is your United States of America. When you see the demonstration today, think of the destruction the flames cause, don’t be entertained by it, be affected by it.”