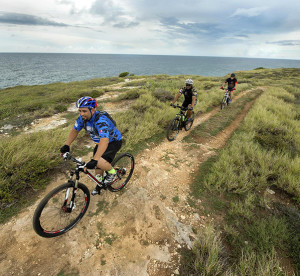 Members of the Warriors 4 Life nonprofit veterans group ride alongside the ocean in Cabo Rojo, Puerto Rico, Aug. 13, 2016. Warriors 4 Life helps veterans cope with physical and psychological wounds and creates healthy lifestyles for them and their families.

As the 100-degree Fahrenheit heat and humidity mercilessly held onto the day, the mountain bike riders slogged through the mud and then looked hopelessly up at the giant hill.

For Army veteran Spc. Jose E. Santiago, thoughts of giving up crept into his mind for the hundredth time.

The Operation Iraqi Freedom veteran was in his homeland of Puerto Rico, and he was in charge of a ten-man veteran team of cyclists for a 100-kilometer race, the Las 100 De La Parguera. He was cramping.  He was in pain.

Yet, Santiago had trained for this race and he was determined to finish it.

“It was emotional,” Santiago said of finishing the race after seeing his teammates cheering him on at the finish line. “It was awesome to see them. I knew they would be there waiting for me.”

Saving lives
Santiago joined the Army 1999 as a combat medic to take care of his son, who’s autistic, and because he admired his uncle, who served 21 years in the Army National Guard. He deployed to Iraq from 2003 to 2004 with the 3rd Army Cavalry Regiment as a line medic. He said he enjoyed saving lives.

“I have no regrets about being a medic. I enjoyed every single minute of it,” he said. “But it was frustrating at times because you want to be able to help and save everybody. It burns you out a little bit.” 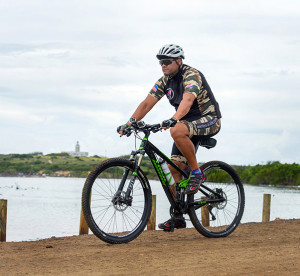 Iraqi Freedom veteran Spcc. Jose E. Santiago rides a mountain bike along an oceanside road in Cabo Rojo, Puerto Rico, Aug. 13, 2016. Santiago rode in a 100-kilometer race in Puerto Rico for the Warriors 4 Life non-profit veterans group, which helps veterans cope with physical and psychological wounds and creates healthy lifestyles for them and their families.

Santiago said he received a traumatic brain injury by being knocked unconscious several times from roadside bomb blasts hitting vehicles he was riding in. He was involved in three ambushes. He also has post-traumatic stress disorder. He said his focus during his missions wasn’t on himself.

“My focus was on my patients and on my people,” he said.

Recovery
The combat medic said he didn’t realize he had PTSD at first but he was having trouble falling asleep and having nightmares. He had fallen off of a tank while in Iraq and had sustained a neck injury yet hadn’t been hospitalized for it, but was medically separated after seven years of service due to his PTSD, TBI, neck injury, shoulder injury and gout.

He said he hid his PTSD symptoms with alcohol.

“I had a lot of guilt after I came back from Iraq. I lost a buddy up there and I was the medic there on the scene. After I got out and to this day it still bothers me, so I was one of those veterans who looked for danger. I never tried to hurt myself, but I looked for danger, seeking to get hurt,” he said.

His outlet was being a bouncer at a club and breaking up fights, hoping guys would take a swing at him. “I had guns pointed at my head twice and I didn’t care. I would just laugh at them,” he said.

Santiago said he pushed his family away and wouldn’t let them be part of his recovery process. “When I got out of the Army, I started living in Colorado. I had no family in Colorado at the time. My family lives in Puerto Rico. Every time they saw me they were concerned, but I always pushed them away, so I didn’t allow them to be part of my recovery process.”

The turning point for him was when some of his battle buddies reached out to him. “They told me I have some problems, and I listened to them. I went to the hospital for seven weeks. After that, I picked up cycling and that’s what helped me get over that hump. It’s helped me,” he said. 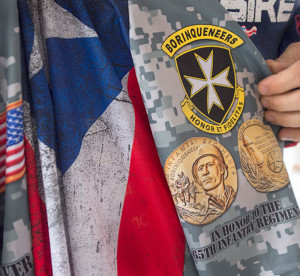 A veteran holds a bicycle jersey with an imprinted emblem of Puerto Rico’s 65th Infantry Regiment in Cabo Rojo, Puerto Rico, Aug. 13, 2016. Veterans riding with the Warriors 4 Life nonprofit veterans group dedicated their ride in a 100-kilometer mountain bike race to the regiment famous for its bayonet charge in the Korean War.

Warriors4Life
Santiago met his current wife, Joann Villegas, and they created the nonprofit group, Warriors4Life, a cycling club where veterans of all disabilities can ride hand cycles, recumbents and road bikes across the nation. He said he only intended it as a club for a small get together but it quickly grew.

The organization is based in Colorado and has begun cooking monthly for the homeless and raising money in Puerto Rico for the Parkinson’s Foundation and Kids with Cancer.

Santiago said he started cycling with mountain biking. His first big event was in Colorado, where he rode 350 miles. He said he thought the ride was crazy, and he wanted to quit but then a veteran came up to him and offered to push him.

“This veteran was an amputee and is pushing me. All I have is PTSD and a brain injury. ‘Well, if he can do this, I can do this,’ I thought to myself. I can’t let anything bring me down, so from there on, I’ve had my ups and downs, but that’s what got me so motivated,” Santiago said. “These guys have that will. I’ve been to the point where I was almost about to give up on me and everything in my life. I didn’t want to live but seeing so many veterans, especially amputees out here cycling and participating in adaptive sports, I got this.”

Honoring the 65th Infantry Regiment
The Warriors4Life team is honoring the 65th Infantry Regiment, nicknamed “The Borinqueneers,” by dedicating their rides throughout the year. They rode with members of the 65th during a Memorial Day ride. The regiment’s veterans earned the Congressional Gold Medal in April. They served in World War II and Korea and served in the last segregated unit and the last battalion-sized bayonet assault in Army history.

“When I saw on the news that they got recognized, and I’m Puerto Rican, it was a proud moment for me,” Santiago said. “Even though I wasn’t from that era, it’s how it all started for us. Right away, we said we have to represent them. We have to dedicate something to them. And to meet them, it just gave me goosebumps. When we did the ride, to have veterans from World War II, Vietnam and Korea, it was a great honor.”

Family
Santiago said he continues to lead Warriors4Life and his teams in rides like the 100-kilometer race in Lajas, Puerto Rico, because of the fellowship. 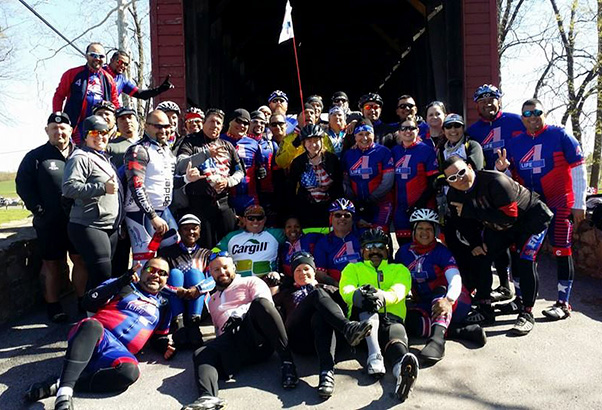 The Warriors4Life team stops to take a group photo during their two-day, 110-mile Face of America bike ride from Arlington, Va., to Gettysburg, Penn., April 25-26, 2015. More than 150 disabled veteran cyclists and 600 able-bodied cyclists participated in the annual World T.E.A.M. Sports event. Throughout the event, each cyclist helped each other along the course.

“It’s about the camaraderie, the teamwork, helping each other and having that military feeling again. It’s having each other’s back,” Santiago said as he flips a pork chop on the grill and then seasons some ceviche, utilizing his degree in culinary arts. “We have dinner together, a quick ride, celebrate Puerto Rico winning its first Olympic gold medal, the whole camaraderie, that’s what it’s all about.”

Santiago said he’s seen a lot of the veterans he’s worked with reduce their medications from 10 to 20 to one-fourth by cycling. “I used to take 10 to 12 medications, and now I’m down to three, and I don’t take them all the time,” Santiago said, smiling. “My medication is my bike. We’ve had guys who’ve been in wheelchairs, and they’re like speedsters on the bike and that’s what keeps us going.”

As Santiago and his fellow veterans wash the mud off their bikes and dig into their pork chops, rice and ceviche, Santiago takes a phone call. He says he’s always busy.

“If a veteran calls and needs me, I’ll be there for them. If I can’t help them, I’ll try to guide them in the right direction. I love it and enjoy every minute of it,” he said with a big peaceful smile.