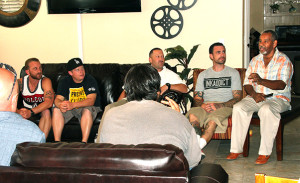 Joe Hunter (far right), CEO of Cycles of Change Recovery Service, welcomes clients who are beginning treatment for addiction. Seated next to Hunter are recovering addicts from Santa Barbara that Hunter invited to mentor and encourage the new guests. When it comes to addiction, nobody is immune.

Age, race, financial status — when it comes to addiction nobody is immune.

“It’s an equal opportunity destroyer,” says Joe Hunter, 62, who is considered an expert.

Growing up in the projects in New Orleans, Hunter became addicted to drugs before he became a teenager. Raised by a family of alcoholics and gamblers, it was just a way of life.

“New Orleans is a city that celebrates everything with alcohol. Holidays, birthdays, weddings, funerals — there is always plenty of alcohol. But you don’t need to be of age or show your ID to buy drugs,” explains Hunter, CEO of Cycles of Change Recovery Services.

A fifth grade drop-out, Hunter was in foster homes and incarcerated by the age of 12. Being homeless wasn’t such a big deal, he explains. Twice, he thought his drugs were more important than his life, so he hung onto them, even at gun point. Shot in the face, he lost his right eye. Another time, he was shot in the back while trying to escape with his prized possessions.

“When a person says they choose to be, or don’t mind being homeless, you know there has to be something wrong,” he said. “Nobody in their right mind would choose that life unless they are running away from something way worse. Sometimes people don’t think they have a choice — they have lost all hope of anything better.”

He says shelters are not the answer, counseling is what works. Building shelters helps people for a moment but it does nothing for them in the long run, in fact, it enables them to spin further out of control.

His awakening was gradual.

“It started weighing on me that I wanted a better life. I knew I would die if I continued the way I was going,” said Hunter.

Checking himself into Acton Rehab at the age of 32, Hunter was already an avid reader and volunteered to help others read — he finally had a purpose.

When he checked out of rehab the staff and his peers cried.

Noting the impact he had on others, a doctor told him he needed to go to school and work in a field that could help people. He studied a bit and got his GED, then a bachelors and master’s degree in Family Therapy from Pacific Oaks College.

“I never thought I could do it until someone believed in me.” He graduated with honors and was disappointed when he received one B. “All I wanted to do was read, learn and help others.”

Hunter said that Acton Rehab is a great center but they didn’t have the resources for a follow up program, so 14 years ago he purchased a home on Beech Street in Lancaster and turned it into a Sober Living Home.

Today he has several beautiful homes throughout the Antelope Valley and 52 employees. “I think we are the best kept secret in the Antelope Valley because most of our clients come from out of state.” Clients range from Wall Street executives to rebellious teenagers from Wisconsin, and everything in between.

Hunter also has veterans he is caring for at no charge because they have no private insurance.

“The reason Joe has such a great success rate is because it is his passion, it is his calling,” says Kara, an Army veteran who is now a counselor at Cycles of Change. “He has the experience and the education, but what I think people pick up on right away, is his heart and wisdom.” Hunter hand picks each councilor.

Kara was happily married and served three years in the Army as an Interceptor Analyst working on surface to air missiles. She was honorably discharged from the Army and was enjoying raising her family when she injured her back while helping her daughter during cheerleading practice. The doctors gave her pain medication and Xanax.

“I was hooked before I knew it — my joy left me.” Her husband, who is an aerospace contractor, intervened after she lost consciousness twice, and made her realize she needed help.

“People can be addicted to shopping, sex, food, exercise — a good thing can become bad if it takes over your life,” explains Hunter. “When addicts say they are only hurting themselves, it is a lie. Anyone who loves them or works with them is affected,” says Hunter.

Starting a family program with Dr. Jim Tracy made all the difference in family recovery.

Tracy spent 35 years as an interventionist in Palm Springs and comes out every eight weeks to teach with Hunter.

“The reason we do this is because when there is an addicted person in the family, their family has resentments, hurts, pains, frustration, anxiety and fear, and at some point they begin to do a dance that creates delusion and self-deception. If you have a 17 year old addict, the family is going to try to save them, and sometimes that enables them to do even more damage,” says Hunter. “They don’t see the addicted animal, they see their child. The whole family needs help.”

Some people are predisposed to addiction and process trauma, medication, stress differently.

“Some people can occasionally self-medicate and be ok, others cannot. Some people use a drug for fun, then it becomes a habit and then a necessity. At that point, it isn’t fun or manageable,” explains Hunter.

Family transactions occur when an addict returns from treatment — they have changed but their family has not, and now the addict is trying to change the family.

“This is why family programs are so important.” Cycles of Change has a program, “Family in Action” which is not about lectures and blame. Counselors help to identify the reason a person becomes addicted and then works towards the solution. “It may take a lot of digging and tears but once the light goes on, healing can begin.”

Local aviation legends, supporters flock together for Gathering of Eagles